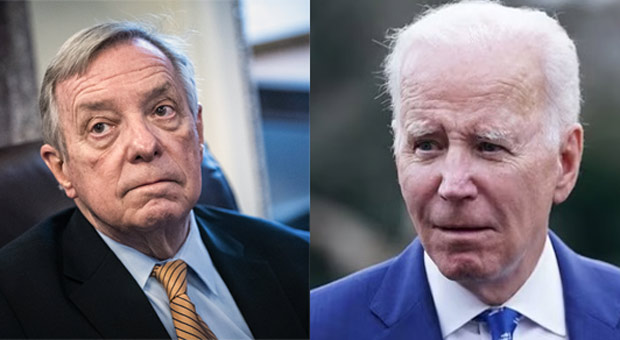 Illinois Democratic senator Dick Durbin attempted to do all the right things in defending President Joe Biden’s handling of classified documents, but it didn’t go well.

But in defending Biden, Durbin made Biden look worse.

During an interview on CNN’s “State of the Union,” Dana Bash played a video of Durbin denouncing Trump’s handing of documents as a “literal outrage.”

She then pointed out to the Senator that the Biden story is playing out in real-time now.

Durbin attempted to pretend his words didn’t hurt Biden’s cause now, but his response dug him a bigger hole.

“At its heart, the issue is the same. Those documents should not have been in the personal possession of either Joe Biden or Donald Trump,” Durbin responded.

“But what happened and followed from it is significantly different,” argued.

He continued to bash Trump but made less sense in the process.

“Donald Trump defied those who knew the documents were in place and ultimately led to, involuntarily, a court order and a search of his Mar-a-Lago hotel resort to find out how many documents were there,” Durbin said.

“Contrast that with Joe Biden. Embarrassed by the situation, as he should have been, he invited the government agencies in to carefully look through all the boxes he had accumulated. It’s a much different approach,” he added.

“It is outrageous that either occurred. But the reaction by the former president and the current president could not be in sharper contrast.”

While Durbin may be correct, the actions of Biden and Trump are in sharp contrast; it is not the one he was trying to advance.

For example, Durbin himself admitted Trump has “defied those who knew the documents were in place.” In more simpler terms, government officials knew Trump had documents that he had claimed rightful ownership of. Whether the claim is correct or not, it is irrelevant to the fact that their existence was well known.

In contrast, in Biden’s case, the existence of the documents was supposedly discovered in November by Biden’s attorneys, a week before the midterms.

Their existence was then covered up for months until a report from CBS revealed the existence of the first batch in a Washington office.

After that, the revelations continued, including documents found in Biden’s home, which were not initially reported to the public.

Even White House press secretary Karine Jean-Pierre told reporters the search had been completed on Jan. 12, which was the very day more documents were found – the public didn’t learn of that until Jan. 14.

Even more documents turned up in Biden’s Wilmington home on Friday, which went back to his service in the Senate.

Durbin claimed that Biden “invited the government agencies in to carefully look,” as if it somehow a display of good citizenship.

However, Biden’s invitation to a federal search is more of a PR strategy than good citizenship.

Biden’s legal team are well aware that the president’s own actions made him a target for a special counsel investigation.

“From his standpoint, with his 2024 re-election hopes now teetering, it was better to pose as a cooperative volunteer than be forced to open his door to federal agents brandishing a judicial warrant.”

As Durbin put it, Biden didn’t consent to a search because he was “embarrassed.” But as we’ve seen throughout Biden’s presidency, embarrassment is more for Americans watching him run the country into the ground, not for the president himself, who is utterly shameless.

Another difference between Trump’s and Biden’s cases, as Durbin pointed out, is that Trump was the United States president when the documents came into his hands. He is correct, but as president, Trump has the power to declassify any document or partial document he chooses.

In Biden’s case, the documents came from when he was not president, therefore, never had such power.

Conclusively, the biggest difference between the two cases is this:

If anyone cannot be trusted with access to classified documents, it’s Hunter Biden.