Steve Bannon Warns Biden: Your Entire ‘Depraved Family’ Is About to Be Exposed 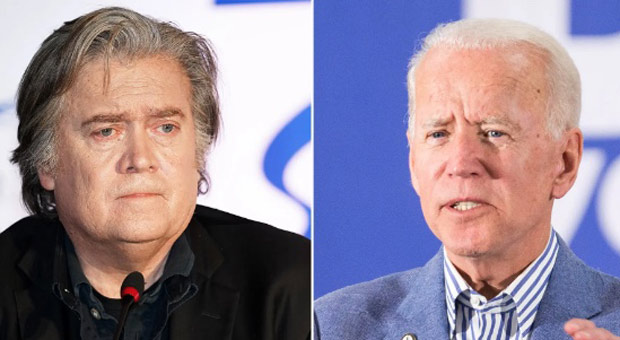 Former Trump adviser and War Room host Steve Bannon weighed in on the “failing” Biden administration on Saturday, warning the president that him and his entire “depraved family” is about to be exposed o the American people.

Attorney Mike Davis appeared on War Room to discuss the counsel investigation against Donald Trump with Bannon just three days after he announced he would be running for president in 2024.

Bannon warned Biden about what was coming.

“The reason we have to have his back more than ever is not simply because of the man, Donald Trump. Part of it is that” he added.

“But part of it is they want to take your voice away by breaking him, and this is the latest attempt to break him,” Bannon said.

“Well I got news for them, the Hunter Biden thing… On the laptop from hell the compromise is at a level of treason,” Bannon continued.

“And you’ll see all of that. But the individual perversion of this family, family, not just Hunter Biden, will shock the American people,” he said.

“And so hey, you’re going to go after Trump, we’ve held back. Sorry, not sorry. We’re going to get into the depravity,” Bannon added.

“The depravity of this family that purports to represent the people of this nation… It’s not just Hunter Biden,” he said.

“It’s the family. The perverted family… It will shock you. Shock you what’s in that laptop. You want to play smashmouth? Hey! We can give as good as good as we get and we’re going to give it hard!”

Trump blasted Garland’s decision to appoint a special counsel to investigate him, telling Fox News that he is “not going to partake” in the investigation.

Garland on Friday appointed John L. Smith as special counsel to investigate Trump. Smith will look into Trump’s handling of classified documents that the FBI seized during a raid of Trump’s Mar-a-Lago estate in August and determine whether criminal charges should be brought against the former president.

Trump said the special counsel’s appointment was “the worst politicization of justice in our country.”

“And I hope the Republicans have the courage to fight this.”

“I have been proven innocent for six years on everything — from fake impeachments to Mueller, who found no collusion, and now I have to do it more? It is not acceptable. It is so unfair. It is so political,” Trump added.