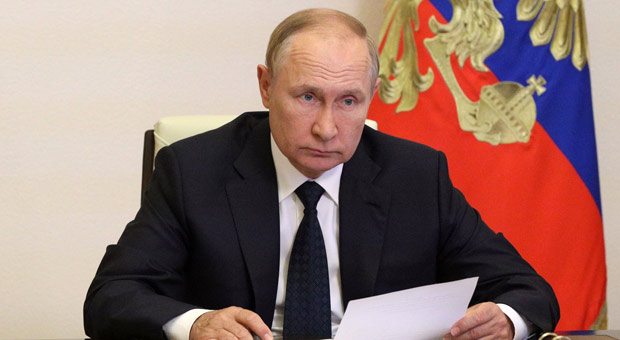 Russia has made a nuclear war warning with the West while making a bomb shelter threat on state TV, according to reports.

The news comes after Russia’s Federal Security Service accused Ukraine of carrying out the murder of Darya Dugina, the daughter of prominent ideologue Alexander Dugin.

Dugin was killed on Saturday evening after an explosive device blew up their Toyota Land Cruiser, Russian investigators said.

But Ukraine denies any involvement in the murder.

At war with the West

Mr. Gurulyov said: “We’re at war with the United States and the UK.”

“If the British soldiers end up on the territory of Ukraine, this war won’t be taking place in Ukraine.

“It will be taking place in all spheres: in space, on air, at sea, on land—including the British territory and the territory of Russia. Russia!”

Gurulyov also slammed the lack of preparation in Russia for a war, urging for bomb shelters and other defence measures to be confirmed.

“Sooner or later, NATO forces will pop up here or there. Let’s start getting ready for it today, to preserve our population and our industry,” he added.

“Nuclear weapons could be used as needed. The time of peace has come to an end. It’s over.”

“Ukrainians – along with their handlers – are getting ready for nuclear terror, up to the war with Russia,” Skabeeva said.

“Ukrainian and Western intelligence services wanted to terrorize the Russian people but they failed.”

Earlier this month, Russia warned of ‘Armageddon’ after tensions around the Zaporizhzia atomic power plant continues to grow.

But Russia denied the charges, claiming Ukraine is risking nuclear catastrophe by shelling the plant.

As The Daily Star reported:

But there are fears Putin’s forces will blame a disaster at the plant on Ukraine and use it as a pretext to deepen the conflict.

Now Russian President Vladimir Putin’s largest state-controlled TV channel has given airtime to the leader of pro-Kremlin Ukrainian movement Parus, Yury Kot, who claimed it was Kyiv and the West jeopardising nuclear safety.

He urged Putin to be ready to fire nuclear missiles at London and Washington.

“We all understand very well that Ukraine and the West are concocting a fictional reality over Zaporizhzhia nuclear power plant,” he said on Channel One.

“We are dealing with the reality.”

“We need to tell Ukraine and its supporting countries – Britain and America foremost…and make it clear.

“If Zaporizhzhia nuclear plant is damaged and a disaster occurs, two missiles will immediately strike your decision-making centres.