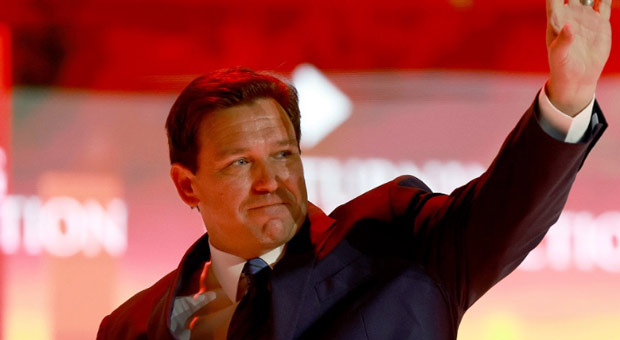 Florida Governor Ron DeSantis is expected to share a “major announcement” on Thursday, which his press secretary says will cause the “liberal media meltdown of the year.”

DeSantis’ press secretary Christina Pushaw teased the impact of the news in a tweet on Wednesday:

“MAJOR announcement tomorrow morning from @GovRonDeSantis. Prepare for the liberal media meltdown of the year,’ Pushaw wrote on Twitter. “Everyone get some rest tonight.”

The news sparked speculation that DeSantis may be preparing to announce his run for president in 2024.

But Ron DeSantis’ spokeswoman threw cold water on the rumors, saying the announcement was related to the Florida Governor’s Office.

She restated that DeSantis intends to run for a second term in Tallahassee this November.

“He already announced he’s running for re-election as governor,” Pushaw wrote. “All I can say about the surprise announcement tomorrow is that it’s not about anything campaign-related. It’s official business.”

Pushaw on Thursday morning then teased this:

“Nobody has guessed today’s announcement yet, though some of you have guessed the governor’s priorities for the next legislative session.”

Florida’s Republican Governor has enjoyed soaring popularity as a staunch critic of the Biden administration.

Ron DeSantis’s battle with the radical ideology of the LGBTQ community has seen his national profile soar.

One such moment was the Republican Governor’sGovernor’s public spat with the Walt Disney Company over Florida’s new ‘Don’t Say Gay’ law.

READ MORE:  Lindsey Graham: 'Definitely Not a Republican Wave, Hats Off To Democrats'

“One of the things that they are trying to do, is they talk about these very young kids getting gender-affirming care,” the Governor said.

“But they don’t tell you what that is, is they’re actually giving very young girls miss double mastectomies. They want to castrate these young boys. That’s wrong.”

DeSantis continued during his press conference:

“We’ve stood up and said, both from the health and children wellbeing perspective, you know, you don’t disfigure 1012 13-year-old kids based on gender dysphoria.”

He also noted a 2011 study suggesting that a majority of transgender youth grow out of it by the time they reach adulthood.

“Eighty percent of it resolves, anyways, by the time they get older,” DeSantis said.

“I think these doctors need to get sued for what’s happening.”