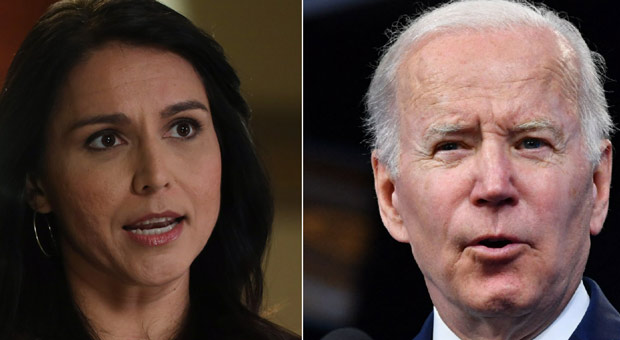 Former Democratic presidential candidate Tulsi Gabbard accused the Biden administration of “promoting child abuse” by endorsing the use of puberty blockers and irreversible surgeries for children.

Gabbard said in a video posted on social media that despite the Food and Drug Administration’s (FDA) warning that gonadotropin-releasing hormone (GnRH) agonists, the Biden/Harris administration continues the advocacy of what it describes as “gender-affirming health care,” giving children easy access to sex change treatments.

“The FDA made a disturbing, but not at all surprising announcement just a few days ago about children’s health,” Gabbard declared.

“Now, if you haven’t heard about it, or if you’ve missed it, it is because the mainstream media and the Biden/Harris administration have been completely silent on it.”

Watch the video below:

Tulsi Gabbard later explained that the FDA’s warning said the blockers potentially cause a series of symptoms in children, including pressure buildup around the brain, vision loss, and headaches.

“Unfortunately, at almost the exact same time the FDA issued this warning, Biden/Harris administration officials were making public statements actively promoting the use of puberty blockers and irreversible surgeries for kids,” Gabbard said.

“Now let’s be clear: this administration is dangerously promoting child abuse,” she concluded.

Pseudotumor cerebri, or idiopathic intracranial hypertension, is when the fluid around the brain and spinal cord builds up in the skull for no apparent reason, causing high pressure that affects the brain and the nerve in the back of the eye, the optic nerve, The Epoch Times notes.

Gabbard’s remark came after the Biden administration’s assistant secretary for health, Rachel Levine, called for laws to “support and empower” youths “to get gender affirmation treatment.”

“So, we really want to base our treatment and to affirm and to support and empower these youths not to limit their participation in activities in sports and even limit their ability to get gender affirmation treatment in their state,” Levine told MSNBC.

The surgeries can entail “top” surgery—to create a male-typical chest shape or enhance breasts; “bottom” surgery—surgery on genitals or reproductive organs; facial feminization, among other procedures.

“Early gender-affirming care” for transgender and nonbinary children is “crucial to overall health and well-being as it allows the child or adolescent to focus on social transitions and increase their confidence.”