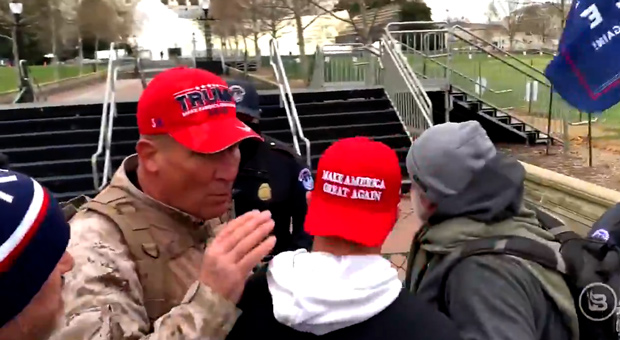 Ray Epps, the man theorized to be a federal informant who infiltrated the election protests on January 6, told congressional investigators he believed the U.S. Capitol was open to the public on the day the riots took place.

Epps’ claims appear in the transcript released by the House January 6 Committee in its final report.

Epps, who also claims he is a Trump supporter, was asked about a video from January 5 showing him urging a crowd to “go into the Capitol” the next day.

When asked if he was under the impression that the Capitol would be open on Janaury 6, Epps replied, “yes.”

He was then asked if “open” meant open to visitors, as “anyone could walk in,” Epps again replied, “yes.”

Epps was also asked why he believed the Capitol would be open, to which he simply said, “It was a weekday.”

Adam Kinzinger (R-IL) asked Epps on how he perceived the adverse reaction he received when he called on the crowd to enter the Capitol when people around him shouted “No!” and chanted “Fed! Fed! Fed!” He said, “I don’t think I thought about it at the time,” and stressed that he thought he “followed that up with peaceably [sic].”

Ray Epps claimed he was trying to stop the onset of violence that day, but contended he may have used a poor choice of words, “It shouldn’t have been said, but I said it,” Epps testified.

Epps said during an interview with the January 6 Committee that “crazy” theories about him made life “really, really difficult.” He also went on to deny he acted on any government agency’s behalf.

“The only time I’ve been involved with the government was when I was a Marine in the United States Marine Corps,” he said.

But there are a lot of strange anomalies surrounding Epps, most notably how he appeared on the FBI’s Capitol Violence Most Wanted list before being removed without explanation.

Kinzinger tweeted in January that Epps “didn’t enter the Capitol on Jan 6, and was removed from the most wanted list because apparently he broke no laws.”

Ray Epps’ attorney John Blischack claimed his client “was removed shortly after he contacted the FBI and/or the FBI contacted me.”

Further details about Epps came to light earlier this year in recordings released to defense lawyers representing people who were charged in connection to the Capitol riot. The tapes revealed Epps called an FBI tip line after seeing himself on a list of January 6 suspects two days after the riot.

Citing sources who heard a recording, the report said Epps explained to investigators what happened in another exchange captured on film, one of which showed him whispering to a man at the barricades outside the building.

However, Epps claimed he was whispering into the man’s ear to try and calm him down. The other man, identified as January 6 defendant Ryan Samsel, confirmed Epps’ account.

Epps denied breaking the law, testifying that he attended Trump’s rally, but realized the Capitol was not open to the public and then tried to de-escalate tension.

“I just looked around, and I was sick. There was a lot of tear gas, a lot of bad stuff going on,” he testified.

Epps added, “I saw people crawling all over the Capitol, climbing the walls. It made me kind of ill to my stomach. I decided to go back to the — there was no point in going back. It had gone beyond to what I wanted it to be.”