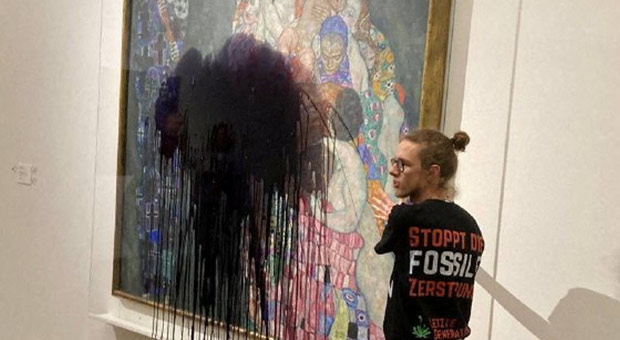 Climate activists attacked a famous Gustav Klimt painting in Austria by gluing themselves to the frame while pouring a black, oily liquid over the iconic piece of art.

The group Last Generation Austria tweeted they had targeted the 1915 painting “Death and Life” at the Leopold Museum in Vienna in protest against the use of fossil fuels.

One activist glued his hand to the glass over the painting’s frame, while another was pushed away by the museum guard.

The group said in a tweet they were protesting “oil and gas drilling,” which they called “a death sentence to society.”

In the video, one of the activities can be heard shouting, “we have known about the problem for 50 years – we must finally act, otherwise, the planet will be broken.”

“Stop the fossil fuel destruction. We are racing into a climate hell,” he added.

Police arrived at the museum, and the black liquid was quickly cleaned off the glass protecting the painting.

According to reports, activists managed to smuggle the liquid inside by hiding it in a hot water bottle under their clothes.

The Klimt work depicts death on the left side and a group of partially naked, hugging people on the right side.

Climate activists have not just been attacking art but also war memorials in protests against fossil fuels.

Any questions that the Left is populated by extremely idiotic people? What does destroying artwork have anything to do with trying to fight the myth of climate change? Answer: nothing whatsoever. It’s mindless destruction.