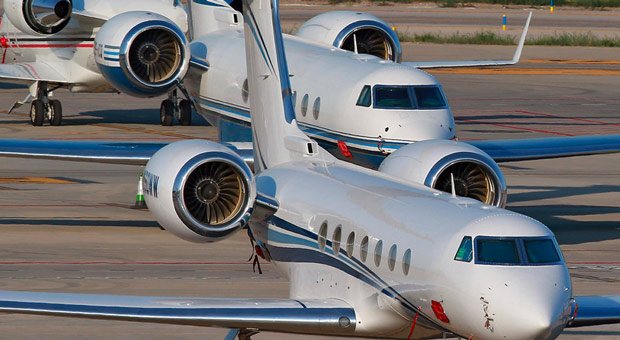 Some 400 private jets carrying elites descended upon the Red Sea resort town of Sharm El Sheikh for the UN COP27 climate conference, sparking a massive debate on the hypocrisy surrounding the event.

The COP27 climate change summit has presented the world with the outrageous double standards of those elites lecturing us about the environment.

According to Agence France-Presse (AFP) report on Friday, over 400 private jets have landed in the Egyptian coastal city.

A source close to the local aviation authorities told the news agency: “More than 400 private jets landed in the past few days in Egypt.”

“There was a meeting ahead of COP27, and officials were expecting those jets and made some arrangements in Sharm el-Sheikh airport to welcome those planes.”

This isn’t the first time the globalist elites have shown their double standards.

RELATED: Bill Gates: ‘Too Difficult’ For Elites to Give Up Private Jets to Fight Climate Change

Last year, a similar number of private jets flew into the COP26 conference in Glasgow – with then-prime minister Boris Johnson and then-Prince Charles opting to fly private despite living in the same country.

The meeting could have been held largely on Zoom if reducing carbon emissions was that important to our rulers.

The UN summit has also come under criticism after offering attendees gourmet meals consisting of meat, fish, and dairy products – another so-called threat to the environment. The UN itself even advocated that the public start eating more ‘sustainable’ food sources, such as insect-derived proteins.

According to the European clean transport campaign group Transport and Environment, a private jet can emit two tonnes of carbon dioxide in an hour and is five to 14 times more polluting per passenger than a commercial plane.

An online emissions calculator provided by the International Civil Aviation Organization indicates that a passenger on a commercial flight in premium class would produce around half a tonne of CO2 overall during a flight from London to Sharm el-Sheikh.

There are more than 33,000 participants registered at the COP27, where delegates are holding high-level talks on scaling up finance for developing countries to green their economies and prepare for global warming impacts.

Scientists say climate change caused by humans burning fossil fuels is worsening devastating disasters, including floods, heatwaves, and droughts, likely to intensify in the decades to come if emissions are not cut.

‘Humanity has a choice: cooperate or perish,’ UN chief Antonio Guterres told the summit on November 7.

For GOD has put it into their hearts to accomplish HIS purpose by agreeing to hand over to the beast their royal authority, until God’s word is fulfilled. Revelation 17:17

Let’s not cooperate and see if we perish. Let’s just say no for a change and refuse the fear mongering and see what happens. My money is on the continuation of live as it always has. God has this.

Psychopaths are incapable of real empathy for others. That’s why politicians generally trample upon the faces of those they are supposed to represent.