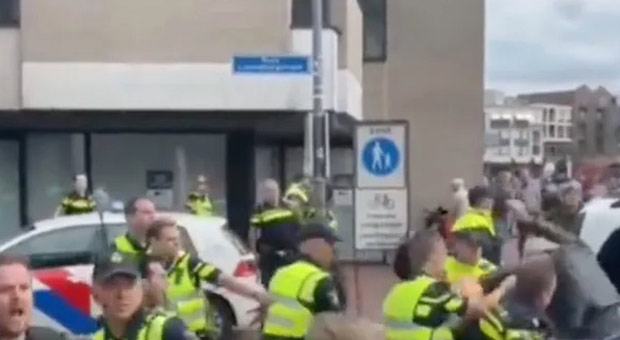 Police in the Netherlands forcefully cracked down on protests from a Dutch farmer group over the removal of a mural in the city that featured the inverted Dutch flag.

The reversed flag has become a symbol of the farmer protest movement and is seen as a defiant opposition to the globalist ‘green agenda.’

But Mayor Arjen Gerritsen ordered the removal of the mural.

Local broadcaster RTV Oost reported that the protesters arrived to defend the mural, which was painted on a wall near the town hall of Almelo.

The slogan, “no farmers, no food,” was also featured on the mural, referencing the green agenda that globalist PM Mark Rutte is attempting to impose on the country.

The scheme looks to cut nitrogen emissions by 70 percent by 2030, putting 30 percent of farms at risk of closing.

The peaceful protest quickly turned violent after one police officer pushed an activist before swinging his baton.

Footage on social media showed police beating back the angered crowd with their batons.

But the farmers stood their ground, eventually forcing the police into an apparent retreat.

A total of four people were arrested during the protest as the mayor warned of further action.

“The police have registered license plates and will still take action against people, so that will have a tail in the context of criminal law,” Gerritsen said.

“There were serious disturbances, people committed violence against the police. I do not tolerate that and then I act, together with an excellent team of police officers.”

The municipality eventually removed the inverted flag mural, replacing it with a blue and yellow painting reading: “Water City.”

The backlash against the climate agenda spearheaded by Dutch farmer groups

Protests show no signs of slowing down as demonstrators accuse the government of a massive land grab from farmers who have held their land for generations.

Protesters have reacted by dumping flaming bales of hay and manure on motorways to form roadblocks in defiance of the government-imposed cuts.

The farmers see more support among the Dutch public, with almost four-in-ten directly supporting the protest movement and 71 percent saying that they understand why the farmers are protesting.

“There is less support for radical activism on the highways, but support for the resistance against the government’s nitrogen plans remains strong,” according to the Elsevier Weekblad magazine.

“The inverted flags don’t just hang on farmyards, they can be seen in numerous regions. Mostly in the North and East.”

The outlet noted that the inverted flag symbols are seen more in the countryside and poorer districts than in the” elite Amsterdam South or the Statenkwartier in The Hague.”

“Farmers in the Netherlands of all places are courageously opposing the climate tyranny of the Dutch government,” Trump said.

Last month, the World Economic was accused of being behind the global attack on farmers, most notably as the United Nations’ “Agenda 2030” Sustainable Development Goals make headway.

The U.N’s 17 Sustainable Development Goals (SDGs) are sown inside policies that are currently waging war on farmers and food supplies worldwide.

Experts say that millions worldwide are facing dangerous food shortages, and it is set to worsen.

According to the U.N., agriculture and food production as a “threat to the ocean.”

The other SDGs are tied to the “war on farmers,” including Goal 14, which addresses “marine pollution of all kinds, particularly from land-based activities, including … nutrient pollution.”

In its report in 2014, Building a Common Vision for Sustainable Food and Agriculture: Principles and Approaches,” the agency calls for drastic restrictions on pesticides, emissions, fertilizers, and water in the agricultural sector.

The U.N. also declares that “excessive use of nitrogen fertilizer is a major cause of water pollution and greenhouse gas emissions.”

The Brits have umbrellas;
The Canadians have hockey sticks;
The Dutch have manure spreaders;
The French have yellow vests;
The Americans have black rifles.

The crowd should have rushed the cops and taken their batons away and beat them with them.