MSNBC: MAGA ‘Upset’ Because Biden Called Out Their ‘Fascism’ 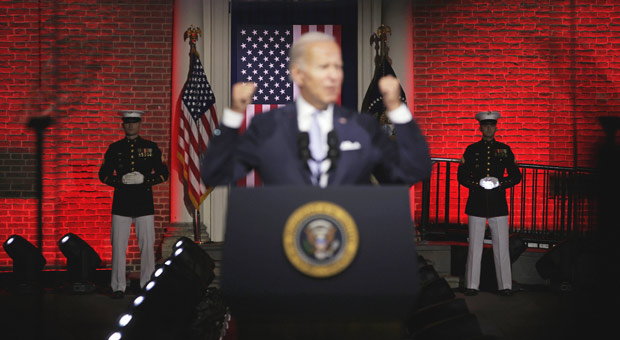 During Monday’s edition of “The ReidOut,” Reid made some incredibly ironic remarks, claiming Biden was calling out “fascism” despite the president’s speech resembling something that would be delivered from a communist dictator.

“The former president was also in the Keystone state this holiday weekend, speaking at a rally for Pennsylvania’s MAGA Republican candidate for governor, Doug Mastriano, and Senate candidate Dr. Mehmet Oz,” Reid said.

“Trump basically went full fascist, denouncing the FBI as vicious monsters despite recent actual attempts by his fans to attack federal law enforcement and calling President Biden an enemy of the state,” she added.

“In his Philadelphia speech, the most divisive speech ever delivered by an American president. Pretty rich coming from Donald Trump.”

“You have had Adam Kinzinger denouncing direct attacks on the FBI, when a MAGA fan literally went into an FBI office, armed up.”

“There’s already been threats. FBI agents are being threatened. So you have threats against law enforcement,” Reid said.

“You have an insurrection in which there was a violent attack on the Capitol, in which they beat up police officers and left five people dead, eventually,” she said.

“You have the demands that procreation be achieved at the behest of the state, essentially state-mandated birth,” Reid added.

“You have an anti-immigrant mania, and you have a cult of personality. If you look up fascism in the dictionary, you’re going to find all of those things. So, I’m really not sure what the republicans are all upset about, other than the fact that it was named.”