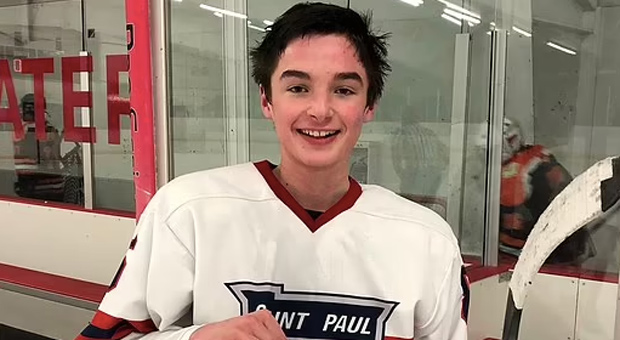 16-year-old Cormick Scanlan died in a St. Paul hospital on Sunday after suffering multiple strokes, which led to emergency surgery as medics scrambled to save his life.

The teen passed “peacefully” and “surrounded by family,” the group said.

Cormick suffered his first stroke on December 6 and was diagnosed with moyamoya disease, a rare progressive cerebrovascular disorder causing blockage to the main blood vessels entering the brain.

“He had bypass surgery on Thursday the 15th to repair the left side carotid artery with blood vessels from his head. Sadly, he suffered additional strokes thereafter,” the hockey club said.

The Daily Mail reported that Cormick played for the Capitals last season and this year played for Cretin Derham Hall, where he was a sophomore.

“This is a kid who lived what we talk about every day,” coach Derek Weinke told KMSP-TV. “The values of selflessness, of hard work, integrity… these are all things that this young man had.”

“We kind of thought, ‘Hey, now we know what it is, they’re going to do this procedure, and he’s going to battle back,'” said Weinke.

“We don’t know what it’s going to look like on the other side, but it’s Cormick, he’s going to battle through this, and then things took a turn, and then it got worse.”

In an update on CaringBridge following his death, Cormick’s mother, Heather, wrote:

“There is something beautiful about him starting his heavenly journey on Christmas.”

“We are thankful for the time Mick granted family and friends to visit one last time,” she added.

“Words cannot express how much joy Cormick brought his family. We are heartbroken.”

My Primary Dr still pushes me to get it-unbelievable.

The best thing you could do for your health is to abandon allopathic medicine completely. You’re a money sponge your doctor wrings out every time you visit. It doesn’t care if you live or die, it still gets paid.

My primary care location still requires masks. I commented today that the masks are useless and they did the right thing, ignored me. I would have argued until I got kicked out if they had not. It is so stupid.

Nothing to see here, move along.

The teen passed “peacefully”??? I’m sure his parents and family members didn’t!

Yeah right! And ‘multiple seizures’ are so peaceful.