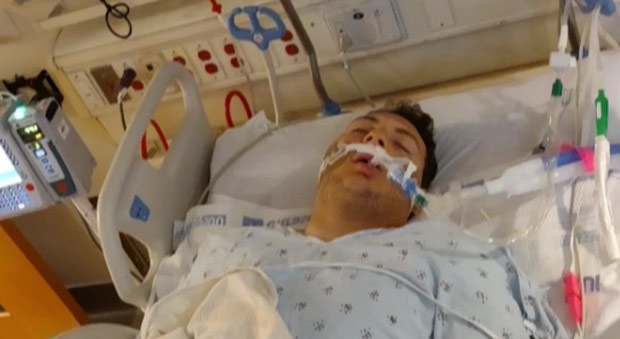 A 16-year-old football player and wrestler for Mount Pleasant High School in North Carolina was found unconscious on the floor of his girlfriend’s house after suffering a stroke and a blood clot in his brain.

Tylin McDowell played as a defensive lineman during a match with Maiden Blue Devils for the state playoffs.

Despite the Tigers suffering a 46-13 defeat that evening, the players appeared healthy when they left the feild.

The Independent Tribune reported Tylin was also preparing for the upcoming wrestling season.

But the following day after the match, Tylin was found unconscious on the floor at his girlfriend’s house.

Tylin was rushed to Atrium Northeast, where doctors found a blockage in the blood supply to his brain, indicating a stroke and blood clot.

After undergoing surgery, Tylin was transported to Levine Children’s Hospital, where he is recovering.

Doctors are baffled as to what casued Tylin’s stroke.

Tylin’s father, Tim McDowell, said his son has been very active from a very young age.

“The first thing you think of is , ‘Oh, he must be dehydrated from the game the night before,'” Tim said. “To be so young having a stroke, it’s scary.”

“I believe that whenever he pulls through with this, it will be a huge boost for him and that this will be something for him [that] he can help other people with, knowing he has overcome it himself,” Tim said.

Crystal Rodgers-Butt, Tylin’s mom, said: “I will tell you the truth of this: I have struggled for the past couple years in my faith.”

“It’s indescribable. It’s brought me back to God. It’s brought me closer to God than I’ve been in years. It just made me feel the power of prayer. I can deny God and Christianity all day, but it all went back to my faith. I know it sounds so cliché to say that ‘During the darkest times, you find God,’ right? But it really is a miracle what’s happened with Tylin,” she added.

Both Tim and Crystal said neither of them has a history of strokes in their families.

Although both parents believed their son’s blood clot was caused by playing football, tests revealed otherwise.

“I honestly thought it was something from football because he had just played the game the night before,” Crystal said. “I thought, ‘I bet he has another concussion.’ I just immediately thought ‘football.'”

Tim said, “It’s not confirmed, but we believe it came from a hit he took Friday night in the football game during a play just before halftime where his helmet was knocked off. Upon further review, coaches said they didn’t see a blunt hit. You see where he was face-masked partially, but it still caused Tylin’s neck to jerk to the side.”

“It’s scary. Mount Pleasant just got new helmets before the season, and you try to keep him as safe as you can. But at the end of the day, it’s still football. It was really disbelief. You just don’t hear of anyone his age having a stroke.”

“Some of the other surgeons were thinking that maybe he had an underlying health condition that went undetected, but all reports from CMC are leaning toward trauma,” Tim continued.