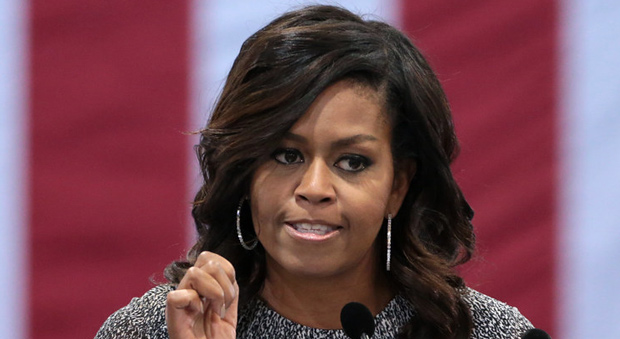 Former First Lady, Michelle Obama, revealed she “couldn’t stand” her husband, Barack, for ten years and described her children as “terrorists” when they were young.

Speaking to Revolt, Obama claimed she and her husband struggled as they were trying to “advance their careers.”

Michelle made the claims while promoting her new book, The Light We Carry.

“People think I’m being catty for saying this: it’s like, there were 10 years where I couldn’t stand my husband,” she said.

“And guess when it happened? When those kids were little.”

“For ten years, while we’re trying to build our careers and worrying about school and who was doing what and what, I was like, ‘Argh, this isn’t even,'” Obama said.

The former First Lady also described her two daughters as “terrorists,” saying they had demands when they were little.

“Little kids, they’re terrorists. They have demands. They don’t talk. They’re poor communicators. They cry all the time,” Obama said.

“They’re irrational. They’re needy. And you love them. And so you can’t blame them, right? … So you turn that ire on each other,” she added.

Predictably, Obama could not resist bringing up the subject of ‘race’ in the interview and referred to having a friend from her children’s school who was black:

“The first friend I made was a black mom. We were in a predominantly white school, and I was like Sasha you and Olivia are going to be friends because she’s a black girl,” she said.

“And they didn’t even like each other. I was like I want to get to know her mother because I wanted the black mom experience.”

“It’s like how you dealing with… and which teachers to look out for,” Obama added.

What would you expect from a psychotic, hate-mongering democrat?!

It’s okay, Michelle. A lot of us can’t stand your husband. Or you, for that matter.

““And guess when it happened? When those kids were little.”

America hates the Osama’s too!

At least she is finally being honest about something!

Mike was probably mostly bothered by him blowing other guys instead of him.

You are certainly not alone in that feeling, Michelle.

I’d like to hear what Barrack has to say about Michelle… Not really.

Not to worry, Michelle…most rational Americans can’t stand Barack, either then or now.

For what it’s worth, I couldn’t stand either of you two lumps of excrement and never will.

Barry and the brats are a bunch of dopeheads. And they don’t pump iron like Mike.

“Little kids, they’re terrorists. They have demands. … They’re poor communicators. They’re irrational. They’re needy.”
Interesting that Michelle is starting to sound like a grumpy old white guy. Her description would also fit the folks in charge of BlackLivesMatter, Antifa, or the Trump Impeachment Farces. Or maybe the Government more generally. Her description of kids also is a powerful argument relative to letting the kids choose which s*x they want, which puberty blockers, which topandbottom surgeries, and how much more to lower the voting age.

Left-Leaning 'The Breakfast Club' Hosts Stunned as Callers Say "I'd Rather Have Trump" than Biden
Hosts of Charlamagne tha God’s left-leaning ‘The Breakfast Club’ were left stunned...
No posts found
wpDiscuz
14
0
What are your thoughts? Click to commentx
()
x
| Reply