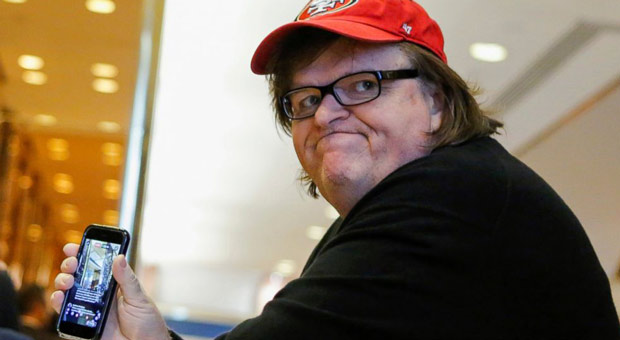 A video of left-wing Michael Moore predicting the magnitude of Donald Trump’s inevitable victory in 2016 has resurfaced across various social media platforms.

In the 4-minute clip, Moore appears to be speaking at an event in Ohio prior to the 2016 Presidential Election, emphasizing the unprecedented body blow the Washington D.C establishment would receive on November 8.

Despite many Democrats being comfortable in what they believed to be a secure win with then-candidate Hillary Clinton, Moore saw the writing on the wall – disenfranchised middle America now had their chance to say F**k you to the system.

In his 2016 prediction, Moore went on to describe Trump as a “human-molotov cocktail,” a weapon the average working man and woman have been waiting to throw at Washington, D.C., and blow up the system.

“On November 8, the dispossessed, will walk into the voting booth, be handed a ballot close the curtain and take that lever, or a felt pen, or touch screen and put a big ‘f-ing’ X in the box by the name of the man who has threatened to upend and overturn the very system that has ruined their lives, Donald J. Trump,” Moore says in the video.

“After they loved him and created him. Thank you media, the enemy of my enemy is who I’m voting for on November 8.” Moore continues.

“Yes on November 8, you, Joe Blow, Steve Blow, Bob Blow, Billy Blow, Billy Bob Blow, all the Blows get to go and blow up the whole G*d damn system because it’s your right,” Moore says.

“Trump’s election is going to the biggest F-You ever recorded in human history, and it will feel good,” Moore concludes.

I bet the fat slob himself actually voted for Trump. And all this garbage he spews regularly is just BS.

Boycott Tampax Trends on Twitter After Creepy Tweet From the Brand Goes Viral
Feminine product brand Tampax began trending on Twitter yesterday after followers demanded a boycott....
No posts found
wpDiscuz
4
0
What are your thoughts? Click to commentx
()
x
| Reply