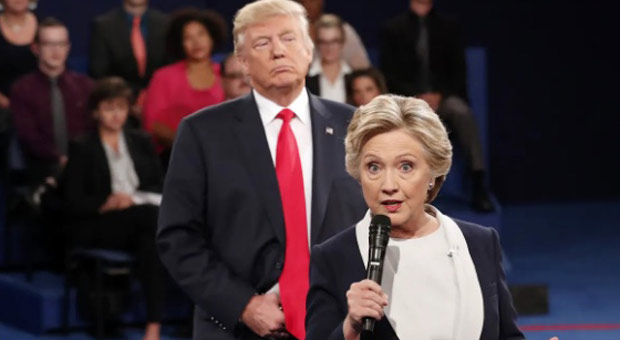 Moore said told The Guardian and several comedians offered to write Clinton a series of anti-Trump jokes and one-liners she could throw at Trump during the debate.

“We offered to write great lines to throw at Trump whose skin is so thin – and if she delivered them right – would just slide in and he’ll explode on the stage on live TV. We were all-in on it, and nobody was going to know,” Moore explained.

Moore said comedians including Chris Rock, Bill Maher, and Amy Schumer were all up for offering their talents to the effort.

“They said, why would you do that? You know Amy, her comedy is apparently kind of dirty. Chris Rock, well, he’s kind of controversial. They didn’t even get to me. They were so afraid of f***ing up and being blamed,” he added.

“That proves my point that we won when they stuffed $400 on the Jersey Shore lady. We need more of that. Call me. Call a couple of Monty Python people. Call us!”

The filmmaker also weighed in on the 2022 midterm elections, saying he was surprised by the outcome.

Moore said although he was sure Republicans would not pull off the predicted red wave, he expected Democrats to do better than simply rearranging a few chairs.

“I never doubted it – there was no way the Republicans were going to have some kind of landslide,” he said.

“I don’t have any special powers, I’m not related to Nostradamus or Cassandra, but I was stunned once again that nobody was willing to stick their neck out.”

“We’ve won seven of the last eight elections in the popular vote, we’ve got more registered, we have a new crop of young people every year, plus the fact that 70% of eligible voters are either women, people of color, or 18 to 25-year-olds, or a combination of the three,” he said.

“That’s the Democratic party’s base.”

Most comedians aren’t funny or even creative. All their humor is written for them by a talented team of writers. The funniest thing these “top comedians” did was support the Hildebeast.