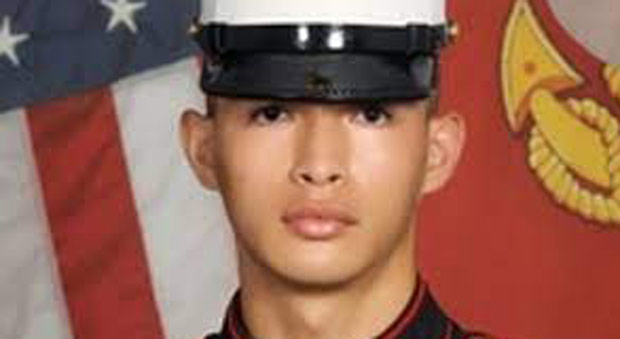 Pong was rushed to Camp Pendleton’s Naval Hospital, where he later died.

A cause of death has not been disclosed.

The commanding general of Marine Corps Recruit Depot San Diego is pledging an investigation into the recruit’s death.

“We are greatly saddened by the untimely passing of Pfc. Javier Pong as he pursued his journey to become a United States Marine,” Brig. Gen. Jason Morris said of the training casualty, according to AP.

“We are committed to honoring his memory, supporting those with whom he served, and investigating the cause of his death to ensure we can safely transform civilians into Marines and retain the trust of the American people.”

Capt. Joshua Collins indicated that Pong’s basic training company was in the eighth week of the training program – as per The LA Times.

“Javier was a faithful Christian who attended church every Sunday and Wednesday and was involved in church activities,” the 18-year-old’s obituary read.

Deaths in Marine Corps recruit training are not uncommon.

According to Military.com, a recruit died during the culminating “Crucible” training exercise last year at MCRD Parris Island.

Brig. Gen. Jason Morris, if only we could believe you.

Another causality of the Biden’s mandatory vaxx mandate.

Sad. Of course, the autopsy will reveal nothing but it is not out of the realm of possibility that this is related to the vaccine.

Some people have congenital defects that, unfortunately, are not discovered until an autopsy. I call attention to Jim Fixx, an icon in the running world. He had a massive heart deformation. His conditioning had covered it up, but, finally one half of his heart could not longer compensate for the weak half.
Semper fi, Private Pong.
You can now guard the streets of Heaven.

why would heaven need guarding?
do you think having to guard something is fun or a reward?

Does anyone believe they will tell us if it was myocarditis? Brought to you by Pfizer!

They were supposed to protect this fine young warrior, not conduct a medical experiment with an ineffective and potentially dangerous mRNA cocktail. This lies squarely on POS Biden & Co.

There are no Pfc’s in boot camp!!

Actually you MF’ers deaths in marine training ARE very uncommon. At least they used to be until you FORCED them to get the clot shot.

YOU KILLED THIS YOUNG MAN !

Another ‘unexpected’ d***h? Must be the vax–right, mokes?

Very likely. It seems that the Marines require all their members to be vaxxed, and the so-called vaccine now has a documented history of causing heart inflammation and clotting, particularly in young males. So, it is logical that the vaccine would be suspect unless proven otherwise. But, for the brainwashed, logic is not in play… right, moke?

Former Trump Allies Who have Turned against Him since Announcing 2024 Run
Some high-profile Republicans and onetime allies of former president Donald Trump have revealed their...
No posts found
wpDiscuz
13
0
What are your thoughts? Click to commentx
()
x
| Reply