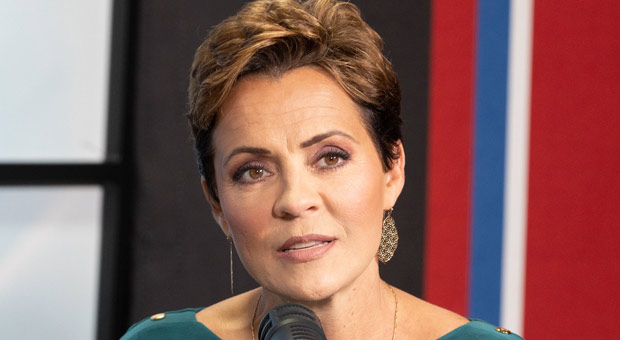 During TV interview that covered a range of topics, Lake was asked if she would back down from declaring an invasion at the U.S. southern border if NFL threatened to pull the 2023 Super Bowl.

Lake responded, saying football teams owned by billionaires would not dictate her policy.

“Do you want to tell me that a bunch of football teams owned by billionaires are okay with fentanyl pouring across our border at a record level, killing our young people?” Lake said.

“The number one killer right now is fentanyl. 18 to 45. It’s killing a generation of people. If the NFL is okay with that, then they gotta do some soul-searching. I don’t think the NFL is that stupid. I really don’t.”

“We want to make sure that we’re stopping the cartels. The people of Arizona is who I work for, and that’s why I’m here with you today,” she added.

Not long after highlighting the massive damange fentanyl has brought to the nation, Lake said she would not take her “marching orders” from the NFL.

“I’m not going to be taking marching orders from the NFL,” Lake said.

“I’m going to be taking marching orders from the people of Arizona who are tired of their children getting their hands on the most deadly drug this country has ever seen,” she said.

The NFL moved the Super Bowl from Tempe, Arizona, to Pasadena, California, for the 1993 game in protest of the state’s refusal to recognize Martin Luther King Jr Day. More than 200 faith leaders have called upon the NFL to move the 2023 game out of the state due to its “restrictive voting laws and attempts among Republican state legislators to overturn election results and consolidate power,” according to the Independent.

Yeah, how did that work out for MLB? Kari is smart enough to stand her ground and let them S***t themselves in the foot if they dare.

Dig up the roads around the statum and let the fans crawl in if they want.

Tax the visiting team every game next year to bring back the revenue if they take the game.