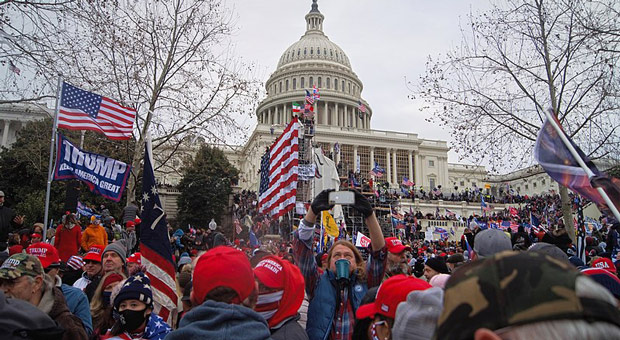 The majority of the January 6 Capitol rioters did not want to start an insurrection or civil war, a comprehensive study by Harvard University has claimed.

The study found just 8% wanted to start an insurrection.

The study’s findings are in direct contrast to the media narrative and the January 6 committee.

In the most comprehensive study to date of what motivated the Trump supporters to attack the Capitol, Shorenstein Center researchers found that 20.6 percent of the rioters, a plurality, were motivated to take part in the riot because they supported Trump.

Another 20.6 percent of the rioters cited Trump’s fraudulent claims that the 2020 presidential election was rigged as their primary reason for participating in the January 6 riot.

The third most common reason for attacking the Capitol: a desire to start a civil war or an armed revolution, according to the study. Almost 8 percent of defendants indicated it was their primary motivation.

In an interview, Fagan notes how frequently support for Trump and concerns about the election were cited as primary motivations for joining the January 6 attack on the Capitol.

Constitutional law scholar Jonathan Turley highlighted the study suggests that many of the Capitol rioters believed, either rightly or wrongly, they were defending democracy, not overthrowing the government:

The study found that a plurality of the 417 federally charged defendants was motivated by the “lies about election fraud and enthusiasm for his re-election.”

It concluded that “[t]he documents show that Trump and his allies convinced an unquantifiable number of Americans that representative democracy in the United States was not only in decline but in imminent, existential danger.”

The study also found that belief in QAnon “was one of the [defendants’] lesser motives.” The study was hardly pro-Trump and one author even expressed surprise with the results since conspiracy theories “were so prominently displayed in much of the [riot’s] visual imagery.”

Once again, none of this exonerates or excuses those who rioted on January 6 or those who fueled the riot. However, the use of “insurrection” by the politicians, pundits, and the press is not an accurate characterization of the motivation of most of the people who went to the Capitol on that day. It was clear that this was a protest that became a riot.

Researchers at the Shorenstein Center reviewed 469 federal court documents to reach this conclusion.

“There was a lot of people who said, ‘You heard it from him. The don is calling us to go to the Capitol.’ People commenting, ‘He said, it will be wild.”

“It’s up to us to make it wild.’ And when Trump called for help, that’s when we saw the most violent protests in a series of protests that we had seen at other capitals after November 3 and before January 6.”

“So this wasn’t completely unprecedented either, that there would be some violence in a capitol and that people would be trying to break in.”

The January 6 Committee continues to claim Trump was culpable for Jan. 6 – this is despite Trump calling for a peaceful protest.

So what you’re saying is 8% of the capital “rioters” were feds inciting a riot.