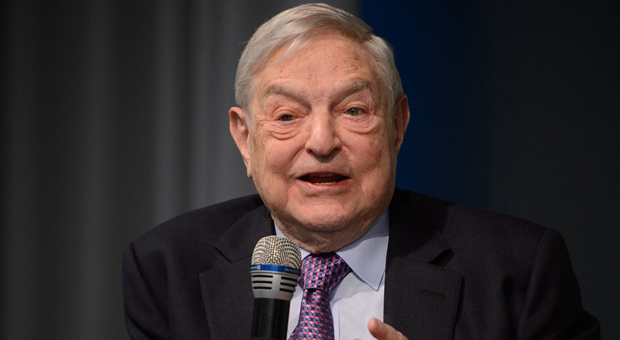 Soros, who also poured $170 million of his own money into Democratic candidates and campaigns during the 2022 midterms, spread the additional donation through the Open Society Policy Center — a 501(c)(4) nonprofit that falls under the Soros-funded Open Society Foundations network, a copy of its 2021 tax filing revealed.

As CNBC reported, The Open Society Policy Center also doled out $138 million to advocacy groups and causes in 2020. Two of Soros’ children sit on its board, the tax filings and website show.

Soros’ contributions to political causes and campaigns since January 2020 now stand at roughly half a billion dollars, most scattered through dark money nonprofit groups.

As Poltico reported, Soros also gave another $50 million to a super PAC in the fall, building on an already significant investment in Democratic groups and candidates for the 2024 election cycle and beyond.

According to the foundation’s website, many Soros’ donations weren’t necessarily earmarked to help sway the midterm elections.

The nonprofits all fall under Soros’ Open Society Foundations network, which describes itself as “the world’s largest private funder of independent groups working for justice, democratic governance, and human rights.”

Over the years, Soros has donated more than $32 billion, its website says.

It also adds it gives “thousands of grants every year toward building inclusive and vibrant democracies,” with active projects in more than 120 countries.

“Wealthy special interests and individuals try to hide their influence in elections, including by funding politically active nonprofits, because they know that the messenger matters,” Aaron McKean, an attorney at the nonpartisan Campaign Legal Center said. “Voters have a right to know who is trying to influence elections so that they can make informed choices when filling out their ballot.”

Most of Soros’ personal donations during the 2022 cycle went to Democracy PAC and Democracy PAC II, the Federal Election Commission filings show.

Both of these groups are run by Soros’ son, Alexander Soros, who sits on the boards of the Open Society Institute and Open Society Policy Center.

According to records, the Democracy PACs donated millions of dollars in the midterms to organizations helping Democrats, including support for the Senate Majority PAC and the House Majority PAC.

The Open Society Policy Center’s other donations are listed on their 2021 990:

America Votes: $16.9 million
A voting rights group focused on educating people on how to vote by mail.

Future Forward USA Action: $5.5 million
This 501(c)(4) group donated over $60 million during the 2020 election to its sister PAC, Future Forward USA, which spent millions backing Biden’s run. The Open Policy Center’s website says its 2021 donations were meant, in part, to “support policy advocacy on the Build Back Together legislative package and a global vaccine campaign.” A pared back version of the bill was renamed the Inflation Reduction Act; it passed and was signed into law in August.

Sixteen Thirty Fund: $23.9 million
The group acts as a “dark” money fund for “progressive changemakers” and groups that often align with Democratic Party. It provides operational support, like H.R. and legal resources, to progressive candidates. It recently raised more than $189 million and made $107 million in grants.

When is this election interference from Sorass going to be stopped! Buying elections is against the law. He has duel citizenship end his American citizenship should be taken away and let him go support another country!

actually its reparations. He stole it from the Jews and now he is giving back to the Jews.

Somebody fit that POS with cement shoes, please. In a better country, that b*****d would have been sleeping with the fishes twenty years ago.

Soros & Sons, the worlds most Evil family!
Loved by all liberals who seek world domination with compliant beings called citizens, bowing to their every command.
Hence the creation of transgender “Useful Idiots”, targeting vulnerable children in their pursuit of a more compliant society.
Soros & Sons is the face of Evil!