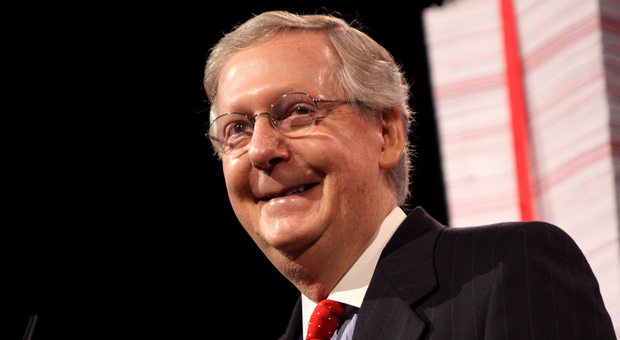 The Senate voted to pass a $1.66 trillion omnibus spending bill on Thursday, with Eighteen Republicans, 48 Democrats, and two independents joining to pass the bill.

The bill must pass through the House before it arrives on Joe Biden’s desk to be signed into law.

The bill will extend government funding through September 30, 2023, including funding around immigration and military aid to Ukraine.

Former President Donald Trump slammed members of the Republican party for helping to pass the bill, specifically targeting Senate Minority Leader Mitch McConnell, who voted in favor of the bill.

The 45th President said the omnibus bill was a “disaster” for the Republican Party and slammed Democrats for pushing the bill through Congress before Republicans have taken control of the House.

McConnell, however, thought the bill was a win for Republicans because it increased the defense budget by nearly 10 percent, the Hill reported.

“The world’s greatest military will get the funding increase that it needs, outpacing inflation. Meanwhile, nondefense, nonveterans spending will come in below the rate of inflation for a real-dollar cut,” McConnell said on the Senate floor, according to The Hill.

If the bill passes, it will direct $19.8 billion toward Ukraine, with an additional $12.9 billion to help the Ukrainian economy. The news comes as Ukrainian President Volodymyr Zelensky visited Congress on Wednesday to ask for more funding.

If it is signed into law, the bill will direct $19.8 billion toward Ukraine and NATO military aid and an additional $12.9 billion to help the Ukrainian economy as it battles through the Russia-Ukraine war, The Hill added. Ukrainian President Volodymyr Zelensky visited with Congress yesterday to ask for more funding.

“I do not support RINOS spending taxpayers’ money like Democrats”

Here is the full list of Republicans who voted in favor of the bill: