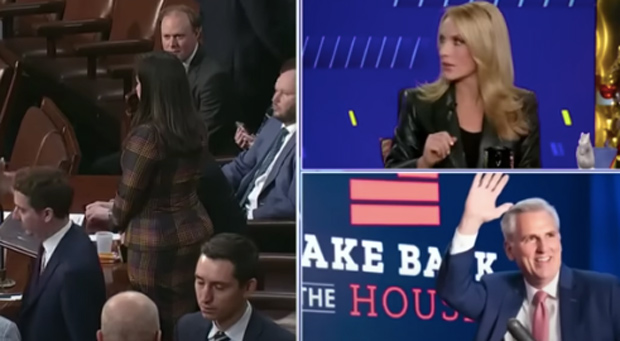 There were visible meltdowns on Fox News, which is understandable if you consider McCarthy was handed-picked by FOX News board member and failed former Speaker Paul Ryan.

Tuesday’s voting was reminiscent of the 2016 Presidential election when networks like CNN and MSNBC hosts suffered epic meltdowns when it became apparent Donald Trump would become president.

This time, a similar chain of events unfolded in a similar fashion.

During Tuesday’s episode of Fox News’s show The Five, it was clear that the hosts were extremely upset House Republicans were blocking Rep. Kevin McCarthy (R-CA) from becoming House speaker.

“You know, it’s time to get together as a party and stop embarrassing yourselves in front of the rest of us,” Judge Jeanine Pirro said.

“How long can this last, Dana?” Jesse Watters asked.

“Well, a hundred years ago, that went to 113 ballots. So this was the third. Okay. It’ll be a long night, folks. Just kidding,” replied Dana Perino.

“Yeah. You know, speaking of drama, you know, the difference between that last vote a hundred years ago and this one, this was on TV. What are we doing?” jumped in Greg Gutfeld…

“…This is the worst game of chicken ever,” Gutfeld concluded.

Another clear sign something is not going according to the RINO’s plan is Democratic strategist and former Clinton advisor James Carville’s claim that Republicans “political suicide” for refusing to vote for McCarthy.

If your enemy is destroying themselves, you don’t interfere. Read the last sentence again.