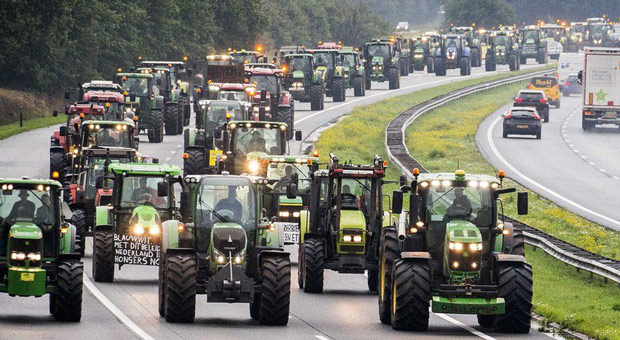 The Minister of Agriculture for the Dutch government has resigned as angry farmers continue to protest against the globalist EU-driven green agenda of Prime Minister Mark Rutte.

Henk Staghouwer, the Agriculture Minister in the Netherlands, announced he was resigning from his post on Monday, saying he believed he was “not the right person” to carry out the high-stakes negotiations between the government and the nation’s farmers.

Dutch farmers have risen in protest to oppose the government curbs on nitrogen emissions to comply with Brussels.

“When I started as Minister of Agriculture, I knew that the sector faces enormous challenges,” Staghouwer said.

“I asked myself the question: am I the right person to lead the tasks that lie ahead as Minister of Agriculture, Nature and Food Quality? I came to the conclusion this past weekend that I am not that person. That’s why I’m stepping back.”

His announcement came just hours after Staghouwer returned from negotiations in Brussels to end the EU exemption for the amount of animal manure Dutch farmers are allowed to spread on their own land.

Only Denmark, Ireland, the Flanders region of Belgium, and the Netherlands are permitted to exceed 170 kilos of manure per hectare, the current EU cap.

But under the terms negotiated by the outgoing Agriculture Minister, the exemption will end in 2026 and impact approximately 18,000 farms in the Netherlands, which spreads more manure on fields than other EU nations.

Farms affected by the decision will only be able to apply for 10,000 euros in assistance, which even Staghouwer acknowledged will not be sufficient to cover their losses, adding it “is not a nice message” to the farmers.

READ MORE:  Rob Reiner Freaks Out About Midterms: 'This Could Be Our Last Election'

“I respect his brave decision to step down from his duties and wish him every success in the future. Minister Carola Schouten is taking over his portfolio for the time being.”

“Rutte himself is the wrong man in the wrong place, who with his mismanagement completely destroys the Netherlands. The farmers are devastated, the land crammed with fortune seekers and the Dutch suffocate and will not get a cent in 2022 to pay their energy bills.”

The massive dispute between the government and the farmers is likely to continue as a recent sit-down between the two sides saw the government blindside the farmer organizations by declaring that they would not discuss changing the timeline to give the businesses more time to transition.

Whoever replaces Staghouwer as agriculture minister will play a key role in future negotiations, and therefore, some have called for the next minister to have a “farming background, “unlike Staghouwer, who ran a chain of bakeries before entering politics.

But IF a technocrat is installed in his place, it will demonstrate that the government has no intention of making compromises with the farmers.