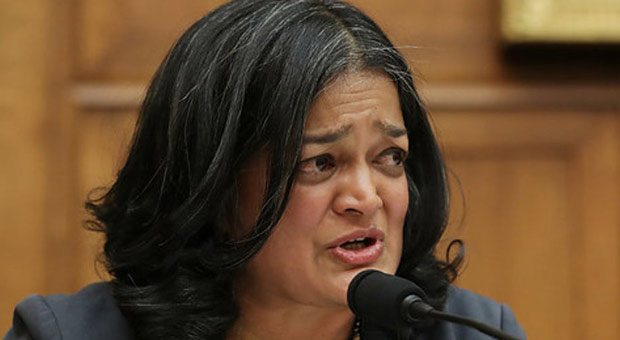 Democrats have been thrown into disarray after House Progressives penned a letter to President Joe Biden calling for peace talks in Ukraine.

Congressional Progressive Caucus Chairwoman Pramila Jayapal, who spearheaded the letter, marked a break within the Democratic Party on the strategy for Russian President Vladimir Putin’s war on Ukraine.

“This letter is an olive branch to a war criminal who’s losing his war,” Rep. Jake Auchincloss, Massachusetts Democrat, wrote on Twitter in response to the peace-talk push.

“Ukraine is on the march. Congress should be standing firmly behind [President Biden’s] effective strategy, including tighter — not weaker! — sanctions,” Auchincloss added.

“There is a moral and strategic peril in sitting down with Putin too early,” he wrote on Twitter. “Sometimes, a bully must be shown the limits of his power before diplomacy can work.”

No ‘blank check’ for Ukraine if GOP wins house

The news comes following House Minority Leader Kevin McCarthy’s warning that Congress will not provide a “blank check” for Ukraine if GOP wins the majority in November’s midterms.

“I have no idea why it went out now. Bad timing,” the Wisconsin Democrat wrote on Twitter. “It was trying to get to a cease-fire & diplomacy as others were banging war drums, not criticizing Biden. I’ve supported the efforts & will continue.”

The letter was signed by 30 House Democrats and cited the “risk of catastrophic escalation” if Biden fails to “redouble efforts” for a cease-fire.

“If there is a way to end the war while preserving a free and independent Ukraine, it is America’s responsibility to pursue every diplomatic avenue to support such a solution that is acceptable to the people of Ukraine,” the lawmakers wrote.

“The alternative to diplomacy is protracted war, with both its attendant certainties and catastrophic and unknowable risks.”

The lawmakers said those efforts should include talks with Russia to “explore prospects for a new European security arrangement acceptable to all parties.”

National Security Council spokesman John Kirby reiterated that policy saying,” We’re not going to have conversations with Russian leadership without the Ukrainians being represented, and that remains the policy and the approach,” he told reporters. “[Ukrainian President Volodymyr] Zelenskyy has said that while he obviously would like to find an end to this war, he does not believe it is time now to sit down and have a negotiated settlement with [Russian President Vladimir] Putin.”

The lawmakers suggested Biden would have strong Democratic support for aid for Ukraine if he followed their advice: “As legislators responsible for the expenditure of tens of billions of U.S. taxpayer dollars in military assistance in the conflict, we believe such involvement in this war also creates a responsibility for the United States to seriously explore all possible avenues, including direct engagement with Russia, to reduce harm and support Ukraine in achieving a peaceful settlement,” they wrote.

The letter also signals that Biden’s Ukraine policy could be at risk.

Jayapal responded to the backlash with a statement attempting to walk back the perceived break within the party.

“Let me be clear: we are united as Democrats in our unequivocal commitment to supporting Ukraine in their fight for their democracy and freedom in the face of the illegal and outrageous Russian invasion, and nothing in the letter advocates for a change in that support,” she wrote.

“Diplomacy is an important tool that can save lives — but it is just one tool,” Ms. Jayapal wrote. “As we also made explicitly clear in our letter and will continue to make clear, we support President Biden and his administration’s commitment to nothing about Ukraine without Ukraine.”