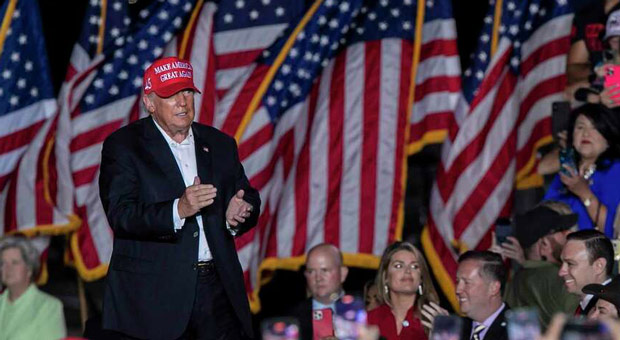 The singing started at 9 p.m. EDT, the same time the January 6 prisoners sing the anthem every night.

Here is an excerpt from the Washingtonian on prison life for J6ers:

“Most of a Sixer’s existence goes down in isolation—the cells on Charlie Two Bravo are singles. Each day, they get a five-and-a-half-hour window of “rec,” or time outside the cell. One day it’s from 9 am to 2:30 pm, then they wait 25 and a half hours for the next day’s rec, starting at 4. Sixers on that rotation get to take part in a cherished ritual: singing the national anthem in unison at 9 pm. When they get to the lyric “That our flag was,” they shout the last two words, “STILL THERE!”

Meanwhile, a leftist journalist twisted the story, “Audience at Trump rally spontaneously starts singing the anthem. Trump seems a little peeved, actually, looks around quietly, and waits. Notably does not sing or mouth the words along with them.”

Meanwhile, a liberal activist was triggered by the crowd singing the Star Spangled Banner:

“I generally try not to share Trump content anymore, but this is more about the audience of his supporters. When Trump brings up the insurrection on January 6, the crowd starts singing the national anthem and gets to their feet.”

RELATED: Jon Voight: Democrats Have Reversed All of Trump’s Accomplishments

Trump hinted he would “probably” run for president again in 2024, but indicated he wouldn’t make any formal announcements until after the midterms.

“In order to make our country successful, safe and glorious again, I will probably have to do it again,” Trump said to applause and chants of “U.S.A.”

“But first we have to win a historic victory for the Republican Party this November,” Trump said.

“They’re against oil, God and guns, and then they say they’re going to do well in Texas,” Trump said. “I don’t think so.”