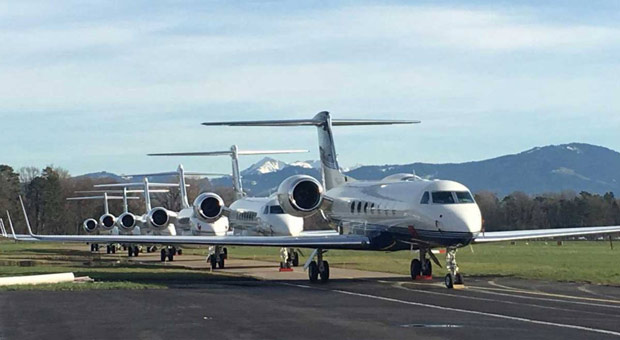 A prominent climate group has turned on the World Economic Forum for its hypocrisy of allowing hundreds of private jets carrying attendees into Davos.

Greenpeace torched the World Economic Forum attendees for traveling to Davos, Switzerland, in a scathing rebuke of the Klaus Schwab run event.

According to a newly released analysis commissioned by Greenpeace found, approximately 1,040 private jets flew in and out of airports servicing Davos during last year’s World Economic Forum conference.

Of those jets, most were embarking on short-haul flights of less than 500 miles that “could have easily been train or car trips.”

One plane carried its passengers a mere 13 miles to attend the event.

“Europe is experiencing the warmest January days ever recorded, and communities around the world are grappling with extreme weather events supercharged by the climate crisis,” said Klara Maria Schenk, a campaigner for Greenpeace, in a statement.

“Davos has a perfectly adequate railway station, still these people can’t even be bothered to take the train.”

The analysis, conducted by Dutch environmental consulting firm CE Delft, also revealed that the number of arrivals and departures out of Davos airports included neighboring countries such as Germany, France, and Italy.

The research concluded that private jet travel in the WEF “Great Reset’ event in 2021 produced carbon emissions equivalent to those caused in one week by 350,000 cars.

Private jet emissions linked to Davos quadrupled during the week of the event compared to weeks before and after the meeting.

“Given that 80% of the world’s population has never even flown, but suffers from the consequences of climate-damaging aviation emissions,” Schenk continued.

“This annual private jet bonanza is a distasteful masterclass in hypocrisy. Private jets must be consigned to history if we are to have a green, just, and safe future for all. It’s about time our political leaders start to lead by example instead of producing hot air in secret meetings with big business.”

The WEF’s theme for 2023 is “Cooperation in a Fragmented World,” which involves “how we can tackle the numerous and interlinked challenges the world is facing and find solutions through public-private cooperation,” the organization’s press release said.

Klaus Schwab said in his opening remarks that “investing into a greener and therefore more sustainable economy” is one of the main objectives of the conference attendees.

Member states of the European Union which rely on fossil fuel production to combat climate change, were forced to scramble for new power supplies after the Nord Stream pipeline attack and Russia’s severing reserves.

WHy are these clowns alive?