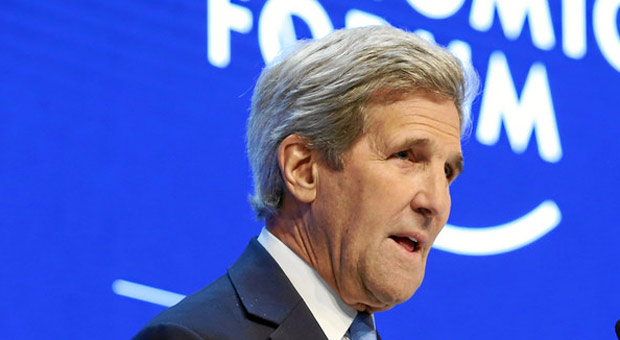 Kerry, the US Special Presidential Envoy for Climate, argued the world is not acting with enough urgency to prevent a “climate crisis” from occurring.

The aging Democrat began his remarks by questioning how “allegedly wise adult humans” such as CEOs and Senators could “ignore our science and want to ignore mathematics and want to ignore physics and somehow cannot bring themselves to do what we need to do.”

Kerry, a billionaire and married into the wealthy Heinz family, praised those in attendance of the meeting, saying how “extraordinary that we select human beings… are able to sit in a room and come together and actually talk about saving the planet.”

“I mean, it’s so almost extraterrestrial to think about quote’ saving the planet,” Kerry said.

“If you said that to most people, they think you’re just a crazy tree-hugging Lefty liberal do-good… but really that’s where we are,” he added.

However, Kerry said that the only way to prevent the Earth from warming by more than 1.5 degrees Celsius (2.7 degrees Fahrenheit) was more money from governments and the private sector.

Watch John Kerry at Davos below

“We don’t have time folks to be cobbling together bespoke deals here, there and everywhere. We have to do it on a massive basis and the key to that one is philanthropy,” Kerry added.

READ MORE: Bill Gates: ‘Too Difficult’ For Elites to Give Up Private Jets to Fight Climate Change

“It’s not the only key, we need governments to put Federal public money into it,” Kerry urged.

Although Kerry admitted that previous United Nations climate change summits had fallen short of his estimation, he said he believes that a World War II-style effort would help limit potential warming to 1.5°C

John Kerry’s remarks came as thousands of private jets descended upon the Swiss village, a spectacle that even the most prominent climate change advocate would find hard to stomach.

According to estimates, emissions from the private jets from the Davos event in 2021 were equivalent to running 350,000 average cars per week.