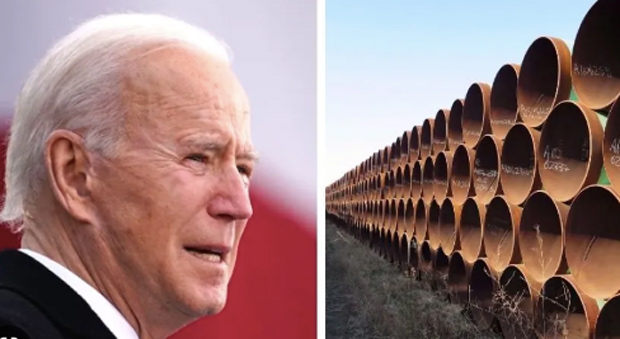 When Joe Biden took office, he killed the Keystone Pipeline, a move that destroyed thousands of jobs to appease his climate-crazed handlers.

Not only did Biden destroy thousands of jobs, but he also cost the U.S. economy billions of dollars that would have been created by being energy independent.

But only now, with the economy in ruins, are the Biden administration admitting their catastrophic mistake.

A congressionally mandated report published by the Biden administration highlighted the economic benefits the Keystone XL Pipeline would have brought the U.S. economy if Biden had not revoked its federal permits.

The report, which the Department of Energy (DOE) completed in late December without any public announcement, says the Keystone XL project would have created between 16,149 and 59,000 jobs and would have had a positive economic impact of between $3.4-9.6 billion, citing various studies. A previous report from the federal government published in 2014 determined 3,900 direct jobs and 21,050 total jobs would be created during construction which was expected to take two years.

But immediately after taking office in January 2021, Biden canceled the pipeline’s permits, effectively shutting the project down.

“The Biden administration finally owned up to what we have known all along — killing the Keystone XL Pipeline cost good-paying jobs, hurt Montana’s economy, and was the first step in the Biden administration’s war on oil and gas production in the United States,” Sen. Steve Daines. R-Mont., said Thursday in a statement.

“Unfortunately, the administration continues to pursue energy production anywhere but the United States,” he added.

“These policies may appeal to the woke left but hurt Montana’s working families,” he continued.

He clearly does not understand that energy is the lifeblood of the U.S. economy.

Biden is an idiot.

Joe Biden and the democrata are stupid. We all know that.

HE IS ONLY DOING THIS BECAUSE HE WILLBE RUNNING AGAIN.. HE DOESNT CARE ABOUT USA JUST HISPOCKET..