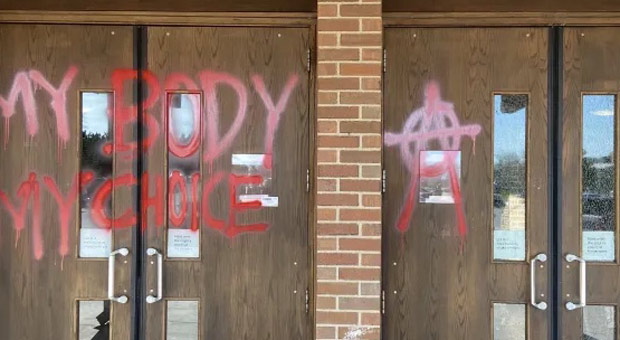 Christian churches were at the brunt of “pro-abortion hostility” since the Supreme Court overturned Roe v. Wade, according to reports.

A new report published by the Family Research Council and titled “Hostility Against Churches Is on the Rise in the United States” stated: “Criminal acts of vandalism and destruction of church property are symptomatic of a collapse in societal reverence and respect for houses of worship and religion — in this case, churches and Christianity.”

“Americans appear increasingly, comfortable lashing out against church buildings, pointing to a larger societal problem of marginalizing core Christian beliefs, including those that touch on hot-button political issues related to human dignity and sexuality,” it added.

According to the report’s analysis of crime data, there were 420 acts of hostility against 397 Christian churches between January 2018 and September 2022.

The report noted the attacks against churches took place across 45 U.S. states and Washington, D.C.,

Between January and September 2022, there were at least 57 pro-abortion acts of hostility against churches, the report showed.

This is a considerable increase compared to incidents from 2019 to 2021, where five pro-abortion incidents were reported, according to FRC.

“When the U.S. Supreme Court’s draft decision in Dobbs v. Jackson Women’s Health Organization was leaked on May 2, 2022, churches saw a spike in graffiti incidents with pro-abortion messages and protests that interrupted church services,” the report noted.

“This trend has continued since the Dobbs decision was officially handed down and Roe v. Wade was overturned on June 24, 2022.”

The majority of incidents were in California, with 51, Texas had 33 incidents, New York had 31, and Florida had 23.

Earlier this year, the pastor of a Catholic church in Katy, Texas, revealed his tabernacle had been stolen from the church overnight. The Catholic Heral reported it was unknown whether the theft was connected to a pro-abortion group’s recent threats to disrupt Catholic Masses on Sunday and burn the Eucharist.

Meanwhile, a Catholic church in northern Colorado known for its active pro-life ministry was vandalized with pro-abortion graffiti.

Hate crimes against Christians soared from 2019 to 2021 before dipping slightly in 2020.

“As a former commissioner and chairman of the U.S. Commission on International Religious Freedom (USCIRF), I’ve seen the warning signs of this gathering like clouds across the Atlantic,” said Perkins.

“As the mainstream culture moves further and further away from a biblical worldview, I’ve witnessed the hostility to moral truth creep closer to our shores. The West, once the safe haven of free speech and religion, is turning cold to our religious foundations that have helped us thrive,” Perkins continued.

Who do YOU think is funding this?
None dare mention them lest they be deleted!

To me it just shows the stupidity of people