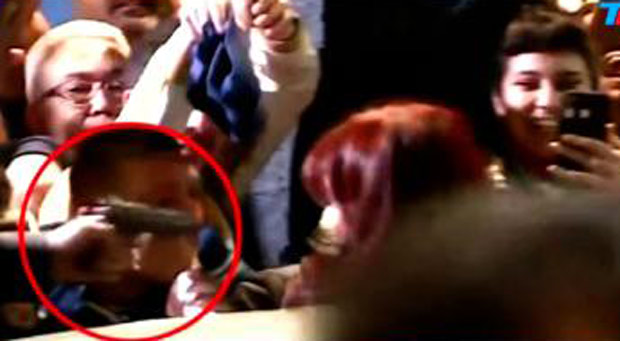 The gunman’s weapon jammed as he aimed at Kirchner.

“Cristina remains alive because, for a reason not yet technically confirmed, the gun, which contained five bullets, did not fire,” Fernández in a nationwide television broadcast, describing the attack as “the most serious incident since we recovered democracy” in 1983.

Below is a video of the incident:

As the BBC reports:

The former president was returning home from court, where she faces allegations of corruption. She denies the charges.

Police said the gunman, who local media identified as a 35-year-old Brazilian man, has been taken into custody.

They are attempting to establish a motive for the attack on the left-leaning politician, Argentina’s president from 2007 to 2015, and its first lady for four years before that.

Video circulating on social media shows the gun emerging from the crowd as Ms. Fernández de Kirchner approaches. She initially appears confused by what is going on, ducking down to retrieve an object dropped on the floor.

The assailant was apprehended, though his name has not yet been released.

“The attack came as the vice president is facing a trial for alleged acts of corruption during her 2007-2015 presidency — charges that she vehemently denies and that have led her supporters to surround her home in the upscale Recoleta neighborhood of Argentina’s capital,” reports the Associated Press.

Kirchner stands accused of defrauding the government and awarding public works projects to her political base in Patagonia.

Prosecutors are seeking a lifetime ban from politics and a 12-year sentence.

But as Senate president, however, she enjoys immunity, which could end with her losing a late-2023 election or if the Supreme Court ratifies her sentence.

Fernández declared Friday a national holiday so Argentines could “express themselves in defense of life, democracy and in solidarity with our vice president.”