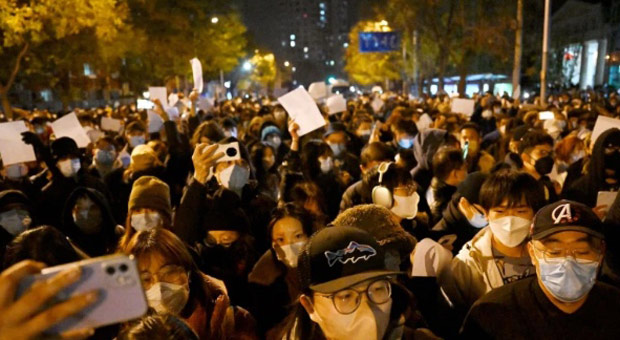 Chinese citizens protesting against the oppressive, draconian COVID lockdown measures will no longer be able to use iPhone file-sharing feature ‘Airdrop,’ preventing them from sharing content.

Apple’s latest update removed the feature and did not notify users.

Bloomberg’s Mark Gurman also quoted one of his tweets earlier this month, saying the “change will eventually go global.”

The AirDrop restrictions in China were implemented after it was reported it was used to share posters opposing Chinese President Xi Jinping and his government.

Before the change was introduced, iPhone users in China could receive AirDrop content from “Everyone” for an unlimited period.

RELATED: Protester in Shanghai: ‘I’m Witnessing History in the Making’

The feature helped protesters in Hong Kong by bypassing China’s “Great Firewall” in 2019, the report noted.

Apple and Tim Cook are facing fire from angry Twitter users for the restrictions on AirDrop, especially after Elon Musk accused the tech giant of suppressing free speech.

AirDrop, the file-sharing feature on iPhones and other Apple devices, has helped protestors in many authoritarian countries evade censorship. That’s because AirDrop relies on direct connections between phones, forming a local network of devices that don’t need the internet to communicate. People can opt into receiving AirDrops from anyone else with an iPhone nearby.

That changed on Nov. 9, when Apple released a new version of its mobile operating system, iOS 16.1.1, to customers worldwide. Rather than listing new features, as it often does, the company simply said, “This update includes bug fixes and security updates and is recommended for all users.”

Hidden in the update was a change that only applies to iPhones sold in mainland China: AirDrop can only be set to receive messages from everyone for 10 minutes, before switching off. There’s no longer a way to keep the “everyone” setting on permanently on Chinese iPhones. The change, first noticed by Chinese readers of 9to5Mac, doesn’t apply anywhere else.

The protests seem to be picking up pace, and the CCP government is trying everything within its power to stop the uprising.

As reported earlier, couple of professors who stood up against the military are now being compared to tank man in China from the protests decades ago.