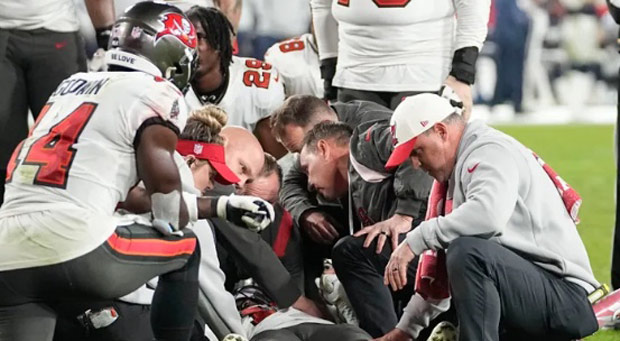 Tampa Bay Buccaneers wide receiver Russell Gage is the latest NFL player to be rushed to hospital after being hit across his neck.

Gage was injured after trying to catch a pass from Tom Brady in the fourth quarter during a playoff game at Raymond James Stadium.

“Just a frightening sight, watching Russell Gage try to get up and not being able to,” announcer Joe Buck.

“They took him to the hospital. Right now, he has a concussion. They’re also testing him for potential neck injuries,” Bowles said.

“His fingers were moving when he was down there. I don’t know about the rest,” Bowles said.

Gage tried lifting his head after the hit but couldn’t as he twisted on the field.

Gage spent four years with the Atlanta Falcons before signing a deal with Tampa Bay this season.

“It was really tough — especially with what happened a couple weeks ago,” Bucs inside linebacker Lavonte David said after the game, according to ESPN.

“You hate to see a guy go down like that, especially with the game being kind of out of reach at that point. It’s really hard to see your teammate like that. We’re all thinking about Russ and hope he’s doing well. Yeah, it’s tough,” he said.

Gosh I have no idea what could be causing this.
/end sarcasm