Almost Half of Americans Believe Humanity Is Living in End Times 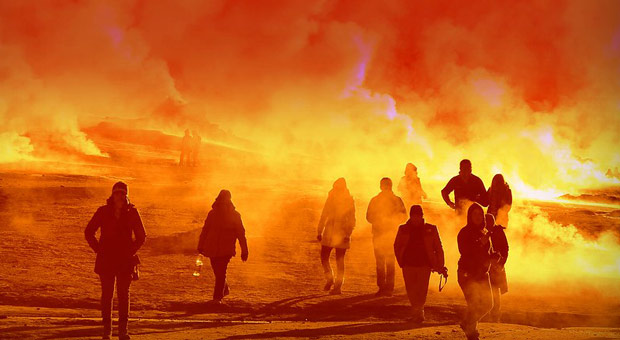 Four in ten Americans believe humanity is living in end times, according to a Pew Research survey.

Thirty-nine percent of those surveyed said they believed humanity is living in the end times. Of those, 14 percent believe that “Jesus will return to Earth someday” and the “world situation will worsen until then.”

The 14 percent’s position is based on the Biblical belief that this is the end of the world as we know it, meaning Jesus Christ will return to gather His own and rule for the next millennium after the tribulation period.

Twenty-five percent of the 39 percent believing in the end times are categorized as “other end-times believers.”

However, 58 percent of Americans believe humanity is not living in the end times, while three percent did not provide an answer.

Of those, 20 percent believe Jesus is returning to Earth, and the situation will worsen until he arrives.

Meanwhile, just 27 percent of Catholics believe humanity is in the end days.

The survey, conducted on April 11-17, 2022, focused on how religion “intersects with Americans’ view on the environment.”

The survey found the majority of Americans with “high” and “medium” “levels of religious commitment” believe “God gave humans a duty to protect and care for the Earth.”

But many such individuals seem to reject the left-wing narrative on climate change.

But Christians, and religiously affiliated Americans more broadly, are not as united in their views about climate change. While majorities of all the large U.S. Christian subgroups say they think global climate change is at least a somewhat serious problem, there are substantial differences in the shares who consider it an extremely or very serious problem – ranging from 68% of adults who identify with the historically Black Protestant tradition to 34% of evangelical Protestants. And half or fewer people surveyed in all major Protestant traditions say the Earth is getting warmer mostly because of human activity, including 32% of evangelicals.

The study also found that “most U.S. adults – including a solid majority of Christians and large numbers of people who identify with other religious traditions – consider the Earth sacred and believe God gave humans a duty to care for it,” the researchers said.

One such subject of debate is the scripture which references the Euphrates river drying up in Revelation 12, which is now believed to be happening.

According to the Associated Press, the Tigris-Euphrates river basin fell “by 40% in the past four decades as the states along its length — Turkey, Syria, Iran, and Iraq — pursue rapid, unilateral development of the waters’ use.”

Well the signs are there.
I am one believing we are living in the latter days and the rule of men.
As to when the true King of this world will return….well, that is not given.
But the “season” describing the days prior to His return, is all around us.
I began to write to my family which became a web page.
Money has no value there, no books for sale, no trips to Alaska the Holy Lands, none of that.
Be prepared to think for yourself.
Mans churches have lost their way and need to return God’s Pattern for His Church and Families.
Nothing will change if they continue because they will be incorporated into the so End Of Day Satanic one world religion which is about to reveal its self to the world.
Be ready to think for yourself.
Best to all and your loved ones, Daniel
https://www.knowingforyourself.com