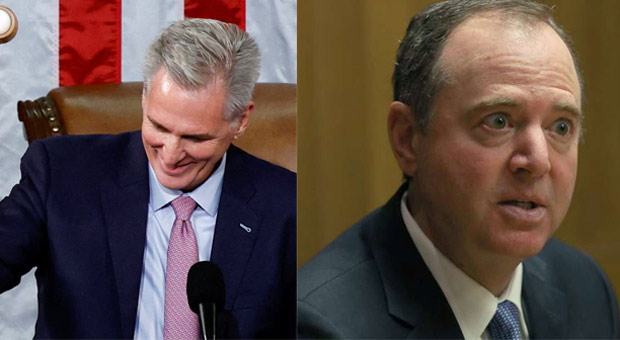 Democratic congressman Adam Schiff took to Twitter after Speaker Kevin McCarthy kicked him off the House Intelligence Committee; his meltdown was epic.

McCarthy confirmed both Schiff and Eric Swalwell of California would be removed, saying the decision was based on “integrity matters, and they have failed in that place.”

“Kevin McCarthy just kicked me and @RepSwalwell off the Intelligence Committee.’

“This is petty, political payback for investigating Donald Trump.”

“If he thinks this will stop me, he will soon find out just how wrong he is.”

“I will always defend our democracy.”

“I have rejected the appointments of Adam Schiff and Eric Swalwell for the House Intelligence Committee,” McCarthy tweeted.

“I am committed to returning the House Intel Committee to one of genuine honesty and credibility that regains the trust of the American people.”

McCarthy said he rejected Schiff for “lying to the American public’ over the Russian interference in the presidential election and Hunter Biden’s laptop. The Republican House Speaker added that he thought the laptop was fake when it was real, and rejected Swalwell for working with a Chinese spy.

“What did Adam Schiff do as chair of the Intel committee? What Adam Schiff did is use his power as chairman and lied to the American public,” said McCarthy at a press conference, growing increasingly heated about the subject as he went on.

“He used his position as chairman, knowing he has information the rest of America does not, and lied to the American public.”

McCarthy also said Schiff lied about not knowing a whistleblower who met with his staff.

“Because you have not had the briefing that I had,” he added.

In 2015, Swalwell was told by the FBI that they were suspicious of her, and she fled the country not long after that.

But Republicans insist Swalwell was careless and said he shouldn’t have retained his position on the committee.

“The FBI was concerned about putting a member of Congress on the Intel committee, that has the right to see things that others don’t, because of his knowledge and relationship with a Chinese spy,” McCarthy continued.

READ MORE: Trump Calls for Adam Schiff to Be PROSECUTED for “The Damage He’s Done to Our Country”

I loved the way McCarthy WENT IN on the liberal hack who tried to stick up for Schiff for Brains and Swallowswell.