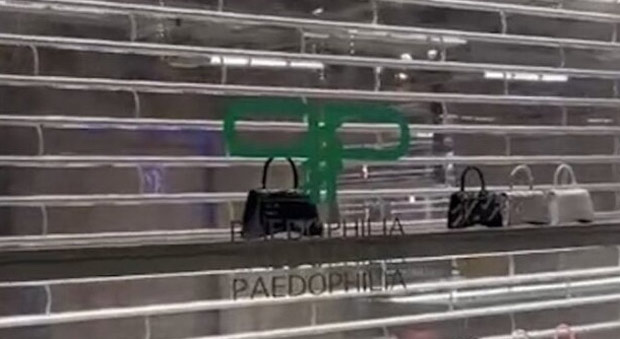 The Balenciaga London store was attacked by a protester yesterday following the groundswell of controversy surrounding the fashion brand.

Street artist Joe Bloggs plastered the word “paedophilia” – using the British spelling of the word – on the store’s window.

Footage shows a man wearing a neon yellow vest attaching something to the front window of Balenciaga London store located on Bond Street.

He then steps back as the word “paedophilia” appears on a vinyl sticker underneath the corporate logo.

Bloggs was caught in action by TikTok user IvoryFlourCakes, who posted the video of them defacing the window of the store to their account.

The activists appeared to be sporting a yellow hi-visibility vest with the words “JC Defaux” on the back. “Faux” is the French word for fake and seems to replicate the outdoor marketing company JCDecaux.

One of Balenciaga’s campaign ads also included a document referencing a U.S. Supreme Court case involving child pornography, which critics say is an attempt by the brand to “normalize child pornography.”

“We would like to address the controversies surrounding our recent ad campaigns. We strongly condemn child abuse; it was never our intent to include it in our narrative. “

“The two separate ad campaigns in question reflect a series of grievous errors for which Balenciaga takes responsibility,” they said.