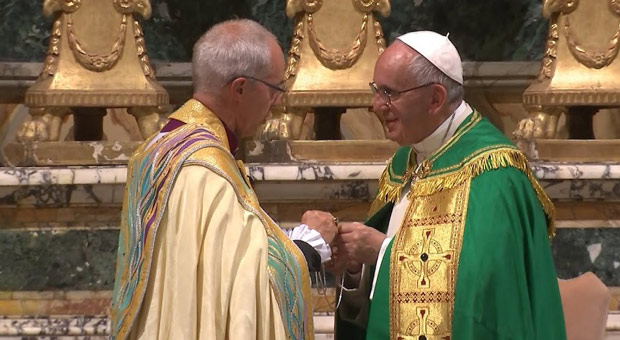 The Church of England announced a £100 million reparations-style package to apologize for its role in the historical slave trade, which it helped abolish in the West.

On Tuesday, the Anglican Church announced a series of measures to compensate for its historic role in the Transatlantic slave trade.

The move came in response to a report commissioned by the Church detailing “shameful” ties to slavery, which will see a whopping £100 million handed out to race-based initiatives such as an “impact investment fund” which seeks to create a “better and fairer future for all” and families descended from slave trade victims.

The move comes amid a looming economic crisis where many churches struggle with upkeep, with 1,000 being closed in the last 30 years and 400 in the previous decade.

The £100 million will also fund more research into the role of the Church in slavery, including examining local cathedrals which may have directly or indirectly benefited from the practice.

Meanwhile, a new oversight group will also be established to “ensure this work is done sensitively and with accountability.”

The Archbishop of Canterbury, the Most Reverend Justin Welby, said: “The full report lays bare the links of the Church Commissioners’ predecessor fund with transatlantic chattel slavery. I am deeply sorry for these links. It is now time to take action to address our shameful past.

“Only by obeying the command in 1 John 1:6-7 and addressing our past transparently can we take the path that Jesus Christ calls us to walk and face our present and future with integrity. It is hard to do this at a time when resources in many parishes are so stretched, but by acting rightly we open ourselves to the blessing of God,” he claimed.

Welby is known to push his left-wing political sensibilities into the Church, ranging from climate change, illegal immigration, and even claiming God is gender neutral.

Welby has continuously pandered to the woke mob, previously apologizing for coming “from privilege and a place of power as a white person in this country.”

The Archbishop also declared there “is no doubt when we look at our own Church that we are still deeply institutionally racist. Let’s just be clear about that.”

Reverend Calvin Robinson, a deacon in the Free Church of England, responded to the woke move by the established Church of England, saying: “Welby apologises again and commits £100m towards woke virtue signaling. The idea of reparations is ridiculous.

“The Christian abolitionists initiated and organized the abolition movement. They ended slavery! This money could be spent funding parishes in dire need of support.”

The eunuchs in the C of E should simply place all of the church’s assets in a trust fund for their parishioner/members and let THEM decide what to do about reparations. If I was a parishioner, I would demand that the church distribute all church assets to the membership in accordance with the length of their membership. Once this occurred, I would demand that the C of E dissolve itself into the chasm of historical memory as a miscarriage of political correctness and ask the priests to S***t themselves as a disgrace to Christianity.