WH Press Secretary: You’re an ‘Extremist’ If You Don’t Trust the Mainstream 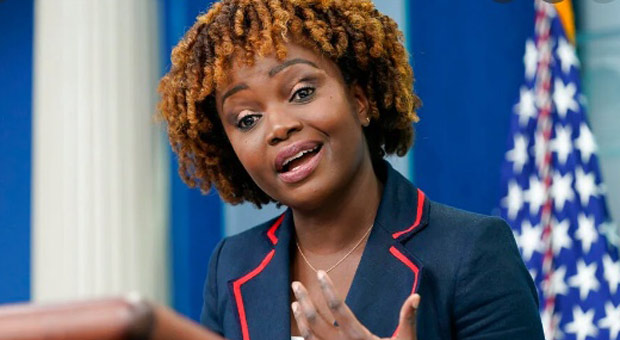 White House Press Secretary Karine Jean-Pierre told reporters that those who disagree with “the majority” are exhibiting “an extreme way of thinking” and must be treated as a threat.

Jean-Pierre’s remarks came hours before Joe Biden exhibited another “extreme” way of thinking by declaring millions of Americans as a threat to democracy.

Jean-Pierre stated, “When you are not with where the majority of Americans are, then, you know, that is extreme.”

“That is an extreme way of thinking,” she added.

Reporters pressed the Press Secretary to clarify what she meant by “extreme.”

On Thursday, Jean-Pierre told reporters, “The president thinks there is an extremist threat to our democracy.”

She added, “The way that he sees is the MAGA Republicans are the most energized part of the Republican party – that extreme, this is an extreme threat to our democracy, to our freedom, to our rights.”

The message seems to be this: If you are not a Democrat, you’re extreme.

Jean-Pierre stated that cutting taxes on the middle classes is “extreme”:

Biden said at the time: “The MAGA Republicans don’t just threaten our personal rights and economic security,” before declaring “MAGA Republicans” are “a threat to our very democracy. They refuse to accept the will of the people. They embrace — embrace — political violence. They don’t believe in democracy.”

“It’s not hyperbole,” he continued, adding, “America is at a genuine inflection point.”

“It occurs every six or seven generations in world history,” further proclaiming, “What we’re seeing now is either the beginning or the death knell of an extreme MAGA philosophy… It’s not just Trump, it’s the entire philosophy that underpins the — I’m going to say something — it’s like semi-fascism.”

Can’t anyone have an opinion?

That’s fascist thinking. You cannot disagree with the fearless leader.

Only if it is the same as the dems.

No one should trust her, she is terrible at her job. She is not that bright either, she could not pass the exams to get into med school for instance which indicates a sub 11o IQ. Why is no in this administration competent?

So, by her logic…

A majority of Americans in latest polls, don’t support Joe Biden. She supports Joe Biden. Since she doesn’t go along with the majority opinion, she is, by her own words, an extremist.

If you are black racist lesbian who hates America, you are a terrorist.

Hey That’s just not right! I am supposed to be able to have free speech and opinion no matter if it contradicts Dur Fuhrer Biden! How many amendments did we lose so far mein Fuhrer? How many have you scheduled for us to lose? What does Biden think he is the Supreme leader dictator? hmm Dr. Evil President Biden? Get him a cat …. Jill must be the extreme part of the Salvation Army’s Dr Squad?

Left-Leaning 'The Breakfast Club' Hosts Stunned as Callers Say "I'd Rather Have Trump" than Biden
Hosts of Charlamagne tha God’s left-leaning ‘The Breakfast Club’ were left stunned...
No posts found
wpDiscuz
9
0
What are your thoughts? Click to commentx
()
x
| Reply