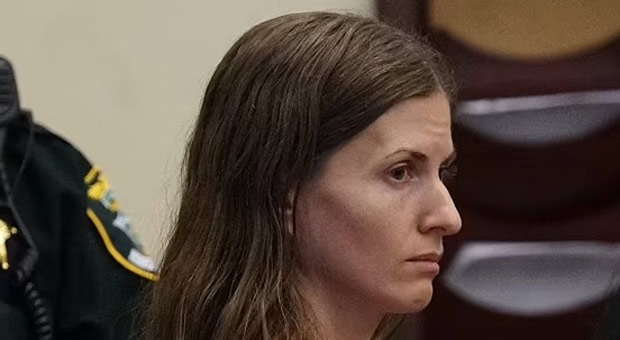 A vegan mother has been sentenced to life in prison after being convicted of the murder in the malnutrition death of 18-month-old son, Ezra O’Leary.

39-year-old Sheila O’Leary, who followed a strict vegan diet, was convicted on six charges in June:

Her sentencing had previously been postponed four times.

O’Leary showed no emotion as the sentence was read out, telling the judge she did not wish to make a statement. Meanwhile, her husband, Ryan Patrick O’Leary, remains in jail while awaiting trial on the same charges.

According to investigators, the couple told them the family ate only raw fruits and vegetables, although their child was fed breast milk.

At the time of the 18-month-old boy’s death, he weighed just 17 pounds and was the size of a seven-month-old baby, a police report said.

The couple’s two other children were also malnourished.

Doctors said Ezra had not been fed for a week by the time he died.

Sheila and Ryan called 911 after Ezra stopped breathing, but paramedics pronounced the toddler dead at the scene. The pair were charged in December 2019 after Ezra’s cause of death was revealed.

Prosecutors at the trial of the vegan mother described an emaciated child who constantly cried.

“She chose to disregard his cries. She didn’t need a scale to see his bones,” they said.

Ezra was also born at home and had never been to a physician.

According to police, the toddler had been nursing when he struggled to breathe.

His parents say they went to sleep instead of calling 911.

Leftists are a menace to society.

And a menace to children.

I read about these things happening far too often. These types of people consider themselves “enlightened” because of their eating choices, et they always fail to see their child getting sicker and failing to thrive. They are too stupid to know they are stupid. These needless tragedies make me angry.

Mrs. O’Leary’s descendents are at it again. First the great Chicago fire, now d***h by vegan diet. Not the brightest bunch, but they sure do make a name for themselves.

Can’t there be SOME type of psych screening we can come up with to freeze out out the “elite” and “commutarded” from normal society? Something HAS to break as they’re coming for children.

Now if she’d killed this poor 18 month old child around 24 months ago, she’d be praised by the left.

So it seems she did not K**l the poor child with a raw vegan diet, as the headline claims. She killed him by not feeding him for a week.