U.N. Warns Situation at Ukrainian Nuclear Plant Is ‘Completely Out of Control’ 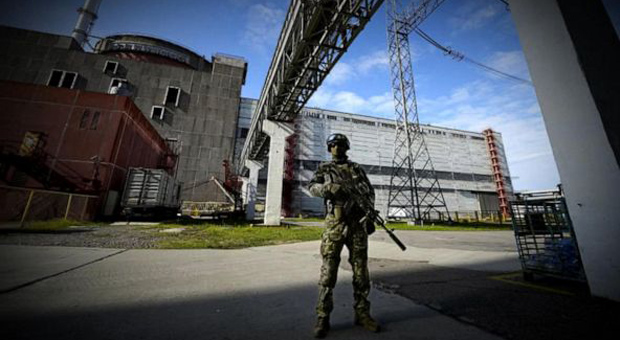 The director of the International Atomic Energy Agency (IAEA), Rafael Grossi, issued a warning about the “completely out of control” situation at the Ukrainian nuclear plant which was seized by Russian troops earlier this year.

“Every principle of nuclear safety has been violated,” Grossi warned.

“You have a catalog of things that should never be happening in any nuclear facility.”

The Ukrainian Nuclear Plant, located in the southeastern city of Enerhodar, was seized by Russian forces in March.

The plant is still operational, under what the IAEA chief described as a “paradoxical situation”:

Russia controls Zaporizhzhia, but its original Ukrainian crew is still handling operations, and the two groups are not cooperating smoothly.

Catalog of misbehaviors at the plant

Grossi said his agency had “patchy” communications with the Ukrainian staff, and could not guarantee they’re receiving all the supplies they need.

Ukrainian and U.S. officials accuse Russia of using the plant as a base to attack Ukrainian forces, as troops know Ukrainians would not return fire.

“There are credible reports, including in the media today, that Russia is using this plant as the equivalent of a human shield, but a nuclear shield in the sense that it’s firing on Ukrainians from around the plant and of course, the Ukrainians cannot and will not fire back lest there be a terrible accident involving a nuclear plant,” Secretary of State Antony Blinken said on Monday.

The Russians accuse Ukraine of attacking the plant deliberately with American-supplied weapons.

Grossi complained that both countries were reluctant to let the IAEA visit the site.

“I have been insisting from day one that we have to be able to go there to perform this safety and security evaluation, to do the repairs and to assist as we already did in Chernobyl,” he said.

“The IAEA needs to go to Zaporizhzhia, as it did to Chernobyl, to ascertain the facts of what is actually happening there, to carry out repairs and inspections, to prevent a nuclear accident from happening,” Grossi said.

On Thursday, more artillery fire was reported in Nikopol, located across the Dnipro River from Zaporizhzhia.