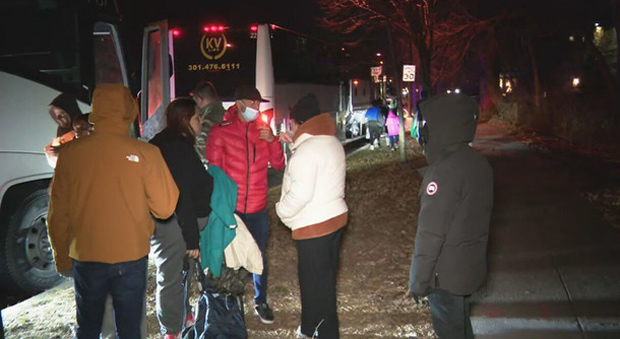 Three busloads of immigrants arrived in the nation’s capital on Christmas eve, including one which unloaded outside Vice President Kamala Harris’s DC residence.

The Migrant Solidarity Mutual Aid Network was there to take the migrants to a local church and provide them with resources as temperatures dropped into the low teens.

7News Washington, D.C. posted a Twitter video showing a group of people entering a bus.
“The third and final bus of migrants of the night of migrants buses up to D.C. from Texas arriving, with Migrant Solidarity Mutual Aid Network taking them to a church,” the tweet said.

Abbott’s actions were intended to shine a light on the border crisis, highlighting the Biden administration’s decision to end Title 42, a pandemic-era emergency health order that allowed immigration authorities at the border to deny entry to immigrants.

The organizer of the Migrant Solidarity Mutual Aid Network, Amy Fischer, told NPR that Abbott’s actions were “rooted in racism and xenophobia.”

“At the end of the day, everybody who arrived here last night was able to get free transportation, on a charter bus, that got them closer to their final destination,” she said.

The news comes amid the Supreme Court’s temporary halt to the expiration of the Trump-era policy.

The Department of Homeland Security estimates it could see between 9,000 and 15,000 immigrants a day once the policy ends. The agency warned immigrants that the administration is continuing to enforce Title 42 after the Supreme Court’s decision. Additionally, DHS alerted those considering entering the country illegally of the dangerously low temperatures at the border as Texas deals with a winter storm.

On Tuesday, Abbott sent a letter to President Joe Biden, demanding he addresses the situation at the border.

“You and your administration must stop the lie that the border is secure and, instead, immediately deploy federal assets to address the dire problems you have caused,” Abbott wrote.

“You must execute the duties that the U.S. Constitution mandates you perform and secure the southern border before more innocent lives are lost.”