Steve Bannon Makes Major Prediction about Trump Ahead of 2024 Election 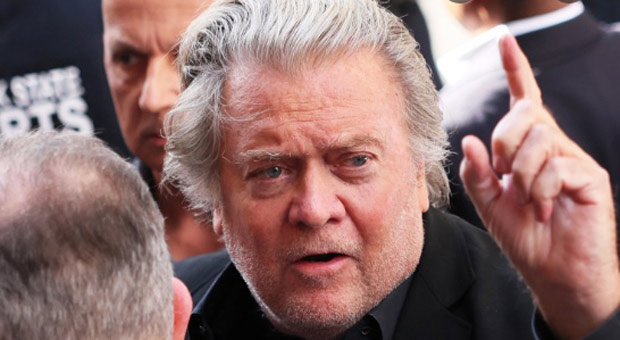 Former White House strategist Steve Bannon has made a big prediction about Donald Trump ahead of the 2024 presidential election.

The former White House strategist revealed what he believes is likely to come for Trump and the Republican Party in 2024.

Bannon made a number of predictions in what will be a crucial next few months.

“2022 is how we are going to stop this. We are going to have a sweeping… I think we can have a 100-seat pickup in the House of Representatives,” Bannon said.

“I think we can flip the Senate. We intend to destroy the Democrat party as a national institution, from school boards all the way up to state legislatures, attorney generals, secretaries of state, to the House and the Senate,” Bannon added.

When Bannon was asked if Trump would run for reelection in 2024, he said:

“Oh, it’s not even a question. He’s going to run. I think you can see from his speeches at his rallies, he’s definitely running.”

“There’s no doubt. It’s clear that Biden isn’t going to run for reelection.”

Earlier this year, Bannon predicted Trump would come roaring back to solidify his place as the leader of the Republican Party.

Before Trump left office, Bannon spoke with the 45th President several times by phone and put aside their differences after he was fired from the administration back in 2017.

“Trump has repeatedly spoken by phone with Steve Bannon in recent weeks to seek advice on his campaign to overturn his reelection defeat, reconciling with his once-estranged ex-White House strategist, sources tell me,” Jennifer Jacobs, a reporter from Bloomberg News, said at the time.

“Trump and Bannon have been talking regularly, multiple sources tell me. They’ve been in communication FOR WEEKS now, patching up earlier rift as Trump sought advice from anyone willing to help him fight his election defeat,” she said.

New York Times author Maggie Haberman said she believes she knows who Trump’s vice president pick will be if he chooses to campaign for the presidency in 2024.

“There’s a couple of people whose names have been mentioned, and the one that actually gets mentioned the most by people close to him is Tim Scott from South Carolina, the senator, and then Sarah Huckabee Sanders, who is possibly the next governor of Arkansas,” the author said as the hosts expressed their contempt.