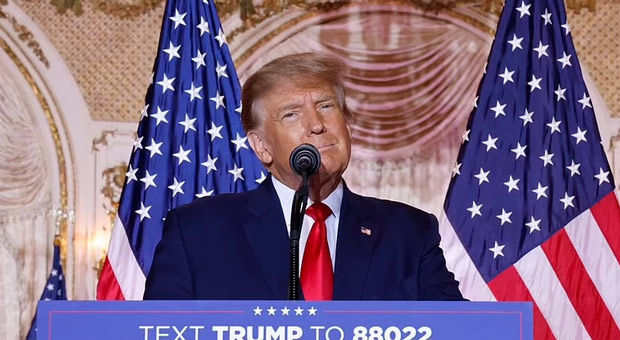 A slew of establishment Republicans blasted Donald Trump’s decision to run again for the presidency in 2024, saying his “crazy” MAGA agenda will cost them the White House.

Leaders and donors appeared to turn on the former president, who announced his long-awaited reelection bid in a speech last night at his Mar-a-Lago home.

Governors, representatives, and even former Vice President Mike Pence said it was “time for a change’ and there were “better choices” for the party.

Former Trump aide, Mick Mulvaney, was asked by CNN’s Anderson Cooper if Trump’s decision to run was good for the party.

“No, I don’t,” Mulvaney said. “Because I think he’s the only Republican who could lose.”

“If he wins in 2024, now he’s the candidate, he is the likely Republican nominee. Can he be beaten head-to-head by Ron DeSantis or Tim Scott? Sure,” he added.

“But it’s not going to be a head-to-head race. There will be five or six other people in the race, and he’ll get the 35 percent that really support him and under the winner-take-all primary system, he’ll be the nominee,” Mulvaney added.

The governor of Arkansas, Asa Hutchinson, chimed in, “Trump is correct on Biden’s failures, but his self-indulging message promoting anger has not changed. It didn’t work in 2022 and won’t work in 2024. There are better choices.”

New Hampshire Gov. Chris Sununu also turned on the “crazy MAGA agenda”: “He’s doing it from a place of defensiveness, of his own self-opportunity and weakness. So he’s announcing he’s going to run for president at a low point in his political career. I don’t know how that’s going to work out, man.”

Top Republican donor and technology entrepreneur from Florida, Ricky Caplin, said: “I have tremendous respect for President Trump and the effectiveness of some of his policies and initiatives, but I think it’s time for a change for our party and country.”

During Trump’s announcement speech, he said: “In order to make America great and glorious again, I am today announcing my candidacy for president of the United States,’ he confirmed to huge cheers.

“Three years ago when I left office, the United States stood ready for its golden age. Our nation was at the pinnacle of power, prosperity and prestige – towering above all rivals vanquishing all enemies and striding into the future confident, resourceful,” Trump said.

All rhinos drain the swamp

A lot of people thought he’d never win the 2016 election. On all sides, most people were mocking him and saying he would never be President. He fooled the naysayers before. He can do it again.

senior repubs are a bigger plague on this country than democrats.

Almost, because they know what’s going on (unlike many brainwashed, indoctrinated Dems) and yet, they “tow the line”.

The RINO shills in DC still don’t understand that MAGA literally IS the Republican Party. No more room or tolerance for Globalist Commie Woke “Republicans.”

“Crazy” is defined by the MSM, entertainment, academia, etc. who have the loudest voices in our country. But I say that saying “I was basically raised in a Puerto Rican family”, and saying “yes, the border is completely secure”, and “the pull out from Afganistan was spectatular”, etc. like Biden has said and all his other insane, lost the plot, bordering on despotic, statements that Biden has said, was the CRAZIER choice in 2020 election.

Why is not the Republican party supporting whomever, like Dems do? Look at Federman and Biden and their insane CRAZY statements AND Biden administration’s insane CRAZY statements, like “the border is secure” and “the pull out from Afghanistan was a great success”??? AND there’s a TON more comments and statements that could be highlighted CONSTANTLY, if the Reps were serious about gaining ground.

These are the people who voted for the most distrusted politician to be their Senate Leader.
Washington DC (District of China)

Keep a list of every Republican who decries Trump’s announcement and run. These are the people that Republican voters need to primary in 2024.

Very few of these RINO’s named have any position now and are all has beens!

What exactly are these “crazy” MAGA ideas? (notice these old hacks won’t say.) Strengthening the border? Enforcing immigration law? Appointing a slew of conservative judges? Appointing the judges who finally over-turned the murder of millions of the unborn? Actual growth in real wages for the first time in a generation? Increasing minority income? Supporting the police? Staying out of foreign entanglements? Standing up to Communist China? Keeping jobs from being out-sourced overseas? Voiding harmful trade pacts like NAFTA? Peace in much of the middle East with the Abraham accords? (Trump deserved the Nobel peace prize for that one.) Supporting first and second amendment rights – even as corrupt media bans speech?

Really. That is a winning agenda.

The RINOs need to be put out to pasture.

If they don’t have Trump it doesn’t matter whether the Republicans get the presidency or not.

Does anyone besides me notice that when these greasy, slimy, America hating globalist RINO cockroaches open their mouths and start bleating that the ‘MAGA’ agenda is, in their minds, somehow ‘harmful’ to America – that they never single out and explain any specific aspects of the MAGA agenda that they think are harmful?

Securing our Southern border and deporting every last illegal, criminal alien is harmful to whom? Shutting down the massive and insanely destructive flood of unskilled, poorly educated, racially and culturally hostile and incompatible aliens from every failed third world dumpster nation is harmful to whom? Protecting the sovereignty of America and taking whatever measures are necessary to prevent the collapse and destruction of Western Civilization is harmful to whom? Promoting a pro-American Nationalist agenda that refuses to cow-tow to the International globalist crazies who are obsessed with destroying the sovereignty of every historic White Western nation and imposing their psychopathic dream of a One World Totalitarian government, ruled over by unelected, power mad elite psychopaths who have zero loyalty to the nations or people who they seek to rule over and who will be unaccountable to those people who they view as serfs and useless eaters – how is this harmful and to whom?

Bringing a screeching and long overdue end to these endless, illegal, unprovoked and unjustified neocon wars of pathologically insane and immoral aggression all over the world that are causing the needless deaths and maiming of thousands of our military personnel and killing millions of people in these nations that the neocons decide to attack and which are bleeding the American tax payers out of billions of their tax dollars that should be devoted to fixing the decaying infrastructure here at home – is harmful to whom?

Ending the clearly destructive globalist agenda of out-sourcing American jobs to the third world and off-shoring the businesses that once provided those good paying jobs for Americans to the cheap labor third world – is harmful to whom?

Fiercely defending, upholding and obeying the U.S. Constitution and protecting the Bill of Rights – especially the 1st and 2nd Amendments – from the relentless attempts by the Communist left and the globalist New World Order psychopaths to deprive American citizens of these and every other freedom that is enshrined within the Constitution – who considers this to be harmful to America?

How about this – instead of importing millions of low skilled, low IQ, poorly educated, incompatible, hostile, unassimilable and culturally indigestible aliens from the third world, why not create incentives and implement policies that encourage native born White Americans to have more children? Policies that reduce the stifling tax burden on the productive middle class that deprive them of the financial resources that they need in order to be able to afford to have more children? Polices that are designed to strengthen the traditional two-parent, male-female marriage and family structure, rather than policies that are designed to weaken and destroy it? Who thinks these policies would be harmful to America?

The answer to every one of my questions is the same. These politicians and media creeps who are trying to destroy the MAGA movement and who are claiming that the MAGA agenda is harmful to America – are globalists who hate and despise America as it was originally founded. They want to destroy MAGA because it stands in the way of their maniacal and psychopathic objective of destroying America and ushering in their tyrannical, totalitarian, One World Government.

This was the purpose of that clearly Satanic speech that Biden gave in Philadelphia, where he stood on a stage behind a blood-red, blatantly Luciferian backdrop and then launched into his psychopathic,rage filled, temper tantrum of hate and venom directed at the MAGA movement.

That was Satan screaming at those who dare to oppose his agenda to swallow up and destroy Christian America. How DARE you oppose me, Satan’s spokesman (Pedo Joe) screamed, as he pounded his fist on the podium

The GOP senior “leaders” have spoken and they will do all they can to undermine the nominee. The GOP is useless to the country and just as corrupt as the Democrats.

Selling their soul to the NWO will help neither party, as it is designed, to minimize populations around the world. The first ones to be dealt with would be the saints, but, they will first be removed by the Lord with a shout.

Senior Republicans ought to show some respect, if that is possible for them!

Former Trump Allies Who have Turned against Him since Announcing 2024 Run
Some high-profile Republicans and onetime allies of former president Donald Trump have revealed their...
No posts found
wpDiscuz
21
0
What are your thoughts? Click to commentx
()
x
| Reply