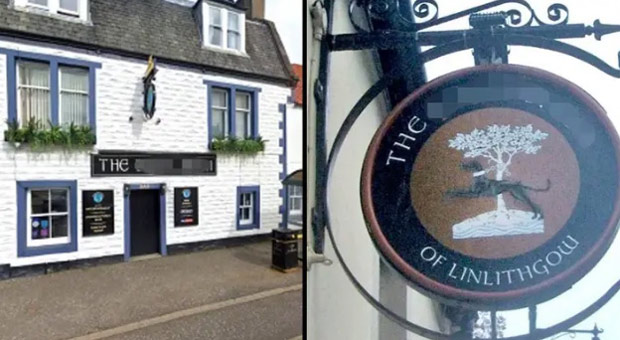 A pub in West Lothian, Scotland, is planning to change its 350-year-old historic name because it is deemed “too offensive.”

In February, Owner Greene King announced it would change the name of The Black Bitch Tavern to The Willow Tree following a public consultation.

The term ‘Black Bitch’ has been associated with the town for more than 700 years, as it carries the name of a legendary black greyhound, according to the West Lothian History and Amenity Society.

The name is so important to the town that there is even a statue to honor this historic name and the area’s rich history.

Former SNP first minister Alex Salmond expressed opposition to ‘woke’ the plans to change the historic name, saying: “Whoever they consulted on this silliness certainly wasn’t local where the name Black Bitch is borne with pride as showing awareness and respect for Lithgae’s rich history.”

Meanwhile, a petition to stop the name change of he pub managed to garner over 11,000 signatures, despite the town of Linlithgow having just under 13,000 residents.

A statement on behalf of the brewery said it was against the West Lothian Council’s decision to control the name of the pub:

“It was made clear to the council’s Development Management Committee both within the officer report and verbally at committee that it is not for the council to control the name of the premises and that there are no planning grounds for either advertisement consent or listed building consent being refused on this basis,” the statement said.

“It was also made clear that Historic Environment Scotland had been consulted and have raised no objection.”

A West Lothian Council spokesperson told British news outlet, the LADbible: “At a meeting of the Development Management Committee in July, the committee voted to continue the two applications and requested that officers sought further information from Historic Environment Scotland regarding the listing of the building.”

“The applications were due to be reported back to the committee in September, but the applicant has now appealed against the non-determination of the applications to the DPEA (Scottish Government Planning and Environmental Appeals Division).

“The decisions on the applications will now be made by a reporter appointed by the Scottish Government.”

But Linlithgow Civic Trust argued that there is ‘nothing racist’ about The Black Bitch, and the name should not be changed.

It read: “It accurately describes a female canine with a black coat.

“We note that Greene appear to have no plans to change the names of their public houses called The Black Horse or The Black Bull.”