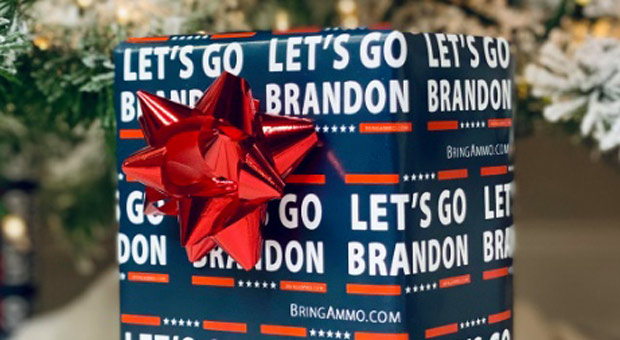 ‘Let’s Go Brandon’ Christmas wrapping paper has doubled in sales since last year as the fad appears to be going nowhere.

The conservative apparel company Freedom Speaks Up said sales for the “Let’s Go Brandon” wrapping paper has sold over 500,000 square feet (more than 6,000 pounds) in 2022.

The company has doubled sales since 2021, when “Let’s Go Brandon” became a household name.

According to CEO Seth Weathers, the company made $1 million in sales in 2021, roughly doubling its 2020 sales with the addition of its “Merry Easter” Biden parody wrapping paper.

“We’re having tons of fun with this, there’s no way to spend $20 bucks and get more smiles on Christmas morning,” Weathers told Fox Business.

The chant has since become a vulgar-free way for Americans to express their disdain for Joe Biden.

But Brandon said potential sponsors have been hesitant to get behind his name due to the popular chant.

“It’s hard for a brand to want to attach to somebody who might be kind of divisive in their consumer base. If I’m going to divide Coca-Cola, why would they want to talk to me? So the short answer is it’s been tough to connect with partnerships just because it’s kind of viewed as a ticking time bomb: ‘What is he doing to choose or say and how would that affect our consumer base?’ It’s too much of a risk.’ I understand it on their side but it’s made it really hard to tie everything down,” he said.

“The unfortunate part is it’s my name and my career that are at stake and the risk is high. If I do something wrong in this arena, my name as a driver falls off very fast,” Brown said.

“It’s an unfortunate situation, and I feel for Brandon, I feel for Kelli,” Phelps told Fox News last year.

“I think, unfortunately, it speaks to the state of where we are as a country. We do not want to associate ourselves with politics, the left or the right.”