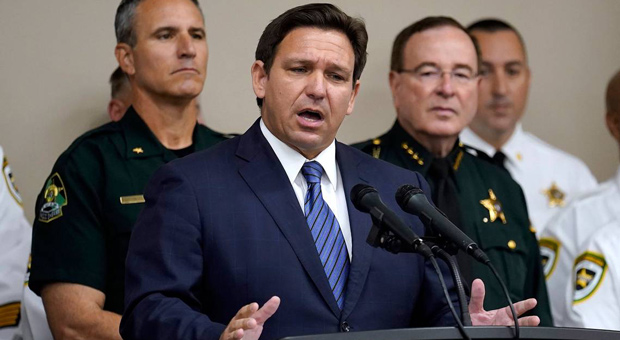 Florida Governor Ron DeSantis sent state police to physically remove George Soros-backed State Attorney Andrew Warren from his office after he suspended him for “picking and choosing which laws to enforce based on his personal agenda.”

DeSantis appointed Susan Lopez as Warren’s replacement after his suspension.

Warren, who served the Thirteenth Judicial Circuit, has repeatedly refused to enforce laws that crack down on child sex-change surgeries.

The radical attorney also declined to prosecute 67 protesters arrested in the George Floyd riots in 2020.

In 2017, Warren said he would only pursue the death penalty “in the very worst cases,” but not where “mental illness played a role.”

“We are suspending Soros-backed 13th circuit state attorney Andrew Warren for neglecting his duties as he pledges not to uphold the laws of the state,” DeSantis’ office said in a statement.

DeSantis takes the gloves off

State police were sent to physically remove Warren from his office, “with access only to retrieve his personal belongings, and (ii) to ensure that no files, papers, documents, notes, records, computers, or removable storage media are removed from the Office of the State Attorney…”

“The constitution of Florida has vested the veto power in the governor, not in individual state attorneys,” DeSantis said.

READ MORE:  Rage Against The Machine’s Tim Commerford Reveals He Has Cancer

“So, when you flagrantly violate your oath of office .. when you make yourself above the law, you have violated your duty and you have neglected your duty, and you are displaying a lack of competence to be able to perform those duties,” he continued.

“And so today we are suspending state attorney Andrew Warren, effective immediately,” DeSantis concluded to applause.

DeSantis’ office issued a statement on the suspension.

“This isn’t about abortion or any one thing, it’s about having accountability to our system of law and order to prosecute crime. There has been a pattern developing in Hillsborough County where one person picks and chooses which laws he wishes to enforce,” DeSantis’ office stated.