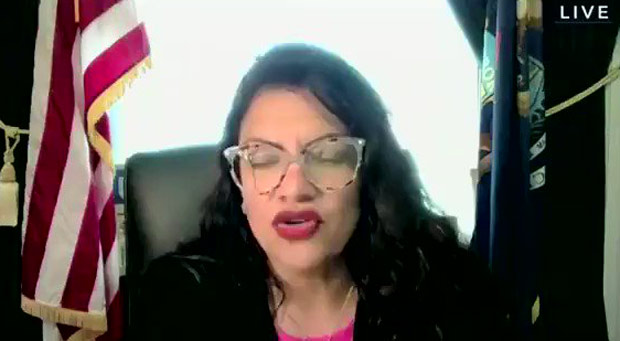 Far-left Rep. Rashida Tlaib (MI-D) asked bank executives who testified before the House Financial Services Committee on Wednesday if they have a policy against funding new oil and gas products.

“Please answer with a simple yes or no, does your bank have a policy against funding new oil and gas products,” Tlaib asked, with JP Morgan Chase CEO Jamie Dimon up first.

“Absolutely not, and that would be the road to Hell for America,” Dimon replied.

Tlaib launched a scathing attack on the bank, urging customers to close their JP Morgan accounts.

“You know what? Everybody that got released from student loans that have a bank account with your bank should probably take out their account and close their account,” Tlaib snapped.

“The fact that you’re not even there to help relieve many of the folks that are in debt, extreme debt, because of student loan debt and you’re out there criticizing it,” Tlaib said before moving on to the following bank executive on the panel.

Not one bank CEO agreed with Rashida Tlaib that they should cease financing fossil energy.

She continued her rant against Dimon:

“I’m not going to ask you, Mr. Dimon, because you obviously don’t care about working-class people in frontline communities like ours that are facing huge amounts of high rates of asthma, respiratory issues, and so much more,” Tlaib said.

“Cancer rates are so high among my communities that I represent,” she continued.

“So I’m not going to ask if you’re committing to ending the financing of a new oil and gas project.”

Critics of the environmental policies Tlaib advocates, argue that those policies have already reduced funding to fossil fuel projects which has exacerbated the energy shortages seen in Europe since Russia invaded Ukraine earlier this year.

American financier Kyle Bass argued that the transition from fossil fuels to alternative energy must not be rushed.

“Snap” needs to be heard coming from this one INTERNALLY!!!

Yup. From an area known as the “neck”.

LOL! Tlaib is a moron. That’s the problem with allowing the Left to dumb down our education system. People are now too dumb to recognize how dumb it is to elect a moron who has no idea about her position or the way the country, economy, or life actually work. Tlaib’s rage was indeed triggered by being defied…but people like her are in a constant state of rage because they get tired of never truly understanding what’s going on around them.

She represents a democrat constructed district called Dearborn MI. Probably the largest Arab population in the nation per sq mile.
The democrats Bush and Obama, built this district with imports from terrorists nations during the, get this, WAR ON TERROR!
Bush and Obama built these Arab communities all over the nation the past twenty years. With our war on terror tax dollars. Moved them here, got them green cards, and promptly ran them for congress. Hand selected communists picked by two former presidents to run for congress.

Ahhh but you can. The process is long and very, very, very, painful, but it has been done. Even successfully, once, I think.

It’s an energy CEO’s responsibility to relieve debt that ordinary citizens have gotten themselves into? Why doesn’t she call up Hollywood millionaires and tell them it’s time to start sending cash to college kids? It would be just as rational.

She needs to go back to the third world barbaric shithole she or her people came from. She’s not fit to represent anyone in a civilized republic.

Germany Bans Farmers from Fertilising Own Land to Serve EU 'Green Agenda'
Farmers in Germany have been banned from properly fertilizing large areas of their land under strict...
No posts found
wpDiscuz
9
0
What are your thoughts? Click to commentx
()
x
| Reply