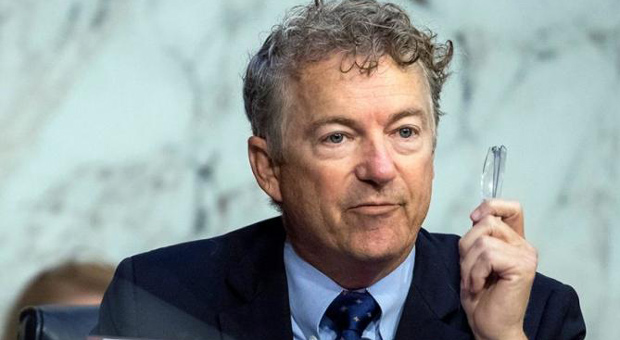 During an appearance on FNC’s “Fox & Friends,” Paul described the raid as an “attack on the constitutional republic.”

The Republican Senator added that it would likely be beyond November before a proper investigation could be conducted.

“You know, I think this is an attack on our constitutional republic,” he said.

“I think it’s an attack on the rule of law. This is the FBI being used as a political weapon against your opponents,” Paul said of the Trump raid.

“I can’t vouch for how far it went up. And they may have tried to keep the White House at arm’s length.”

“But, you know, I wouldn’t be surprised if the White House knew.”

“But I can tell you I’m not surprised with Christopher Wray,” Paul continued.

“I’ve challenged him before on whether or not it’s constitutional to allow foreign intelligence warrants to be used against Americans.”

“You’ll remember when they spied on Trump, to begin with. It was a foreign intelligence court and – warrant,” Paul said.

“And this is not really the same constitutional standard as the Fourth Amendment, and so they don’t have to prove probable cause.”

“And it was a terrible thing that we allowed to happen in our country, and it should never be used against a Republican or a Democrat candidate. But he allowed that and agrees with that. So, I’m not surprised that he also would allow something like this to happen.”

READ MORE:  Chaos as Biden's Motorcade Gets Stuck on Way to Queen's Funeral

“But this is – it’s demoralizing for the country, and it takes away so much faith in our law enforcement to say, oh, my goodness, they’re going to use the FBI to go after people they disagree with politically,” he added.

Can’t take away something that wasn’t there to begin with. I used to be bigly pro-cop, but since this fraudulent regime was installed the police seem to be willing to carry out any and all unlawful orders. I’m no longer pro-cop and that happened long before the gestapo visited President Trump’s house. Rand just doesn’t live in the real world…….yet.

Rand Paul’s awakening will be when HIS home is raided for no legal purpose.

It is without a doubt that Senator Rand Paul, his father Ron Paul, and their families are under surveillance by the FBI and intelligence agencies hoping to get something to prosecute or leak to the public, and if that’s not successful, they will plant or fabricate the evidence they need for a case. And if continued left unchecked, the administrative state police force will simply eliminate its targets.

I grew up with the greatest respect for LEOs. Now I have nothing but contempt for most of them. Some in my family are LEOs, and they say to NEVER let a cop inside your home without a warrant, and NEVER talk to a cop that wants to question you; they will try to get you to talk yourself into prison. Cops can–and WILL–lie to YOU, but if you lie to a cop–even inadvertently, like remembering the wrong date or time of an event–you’ve committed a crime!

Lori Lightfoot Blasted for Blissfully DANCING in Streets of Chicago as Crime Soars 61%
Chicago Mayor Lori Lightfoot was filmed dancing in the streets as violent crime continued to soar in...
No posts found
wpDiscuz
5
0
What are your thoughts? Click to commentx
()
x
| Reply