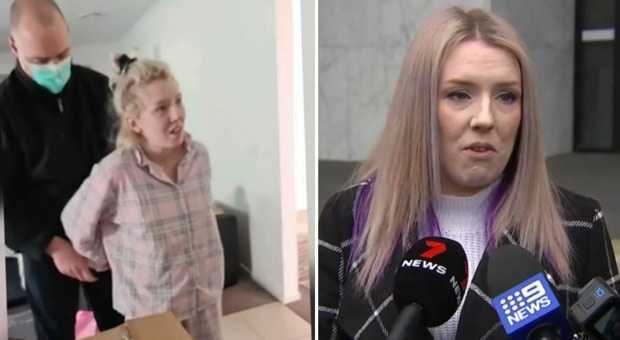 A woman from Ballarat, Australia, who was arrested in 2020 for an ‘anti-lockdown’ Facebook post has had her case thrown out of court.

Zoe Buhler, 30, was charged with incitement after police raided her home two years ago.

Buhler was pregnant at the time of arrest, and was handcuffed in front of her children.

In the viral video, police can be seen raiding Buhler’s home and handcuffing her in front of her family after she posted an ‘anti-lockdown’ post urging people to attend a rally.

Buhler said she had no idea she was breaking any laws as the police read her rights before cuffing her.

“I wasn’t breaking any laws by doing that,” Buhler said to a police officer.

“I’m happy to delete the post. This is ridiculous,” she said.

“My two kids are watching. I have an ultrasound in an hour, [and] I’m happy to delete the post.”

But all charges against Buhler were dropped after a three-day hearing.

In a statement, Victoria Police said they withdrew the single charge following an assessment of the case, determining it was “not in the public interest to continue with the prosecution.”

Ms. Buhler, now 30 years old, said she was relieved but had “no regrets” outside the court this morning.

“I think it’s disgusting our rights and freedoms were taken away. I’ve pretty much felt that way the whole time,” Ms. Buhler said.

“I’ll be considering my options going forward, especially with regards to being handcuffed while pregnant.”

Ms. Buhler said she believed she had been experiencing Post Traumatic Stress Disorder, and the legal costs of contesting the incitement charges had been a burden.

Costs will be agreed upon between the parties at a later date.

“There was money raised to help with the costs of lawyers,” she added.

“I don’t even know how much [it was]. A ridiculous amount.”