Pope Francis: Colonization of the Americas Was ‘Genocide’ against Native Americans 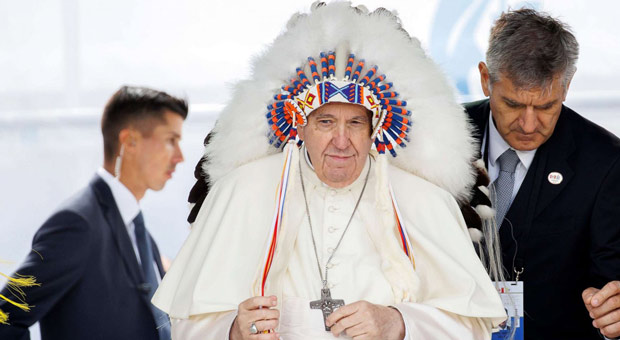 Pope Francis told reporters on Friday that the colonization of the Americas by the British, French, Spanish, and Portuguese constituted “genocide.”

A journalist told the Pontiff that the indigenous people who heard his apology “lamented the fact that the term genocide was not used.”

The journalist pressed the Pope to know whether he would use that term and “acknowledge that members of the Church participated in this genocide.”

Francis hastened to insist that he did not intentionally eschew the word “genocide” in the historical abuse of indigenous Canadians.

“Yes, it’s a technical word — genocide — but I didn’t use it because it didn’t come to mind, but I described,” the Pope said.

“You can all be calm [about this]. You can say that I said that it was genocide,” he replied.

The Pope then noted that regarding the colonization of the Americas by “the British, the French, the Spanish, the Portuguese, there has been a mentality of ‘we are superior, and these indigenous people don’t matter,’ and that is serious.”

Francis added that the problem of all colonialism is that whoever doesn’t enter its path is considered inferior.

“But I want to expand on this. They were considered not only inferior: some somewhat crazy theologian even wondered whether they had a soul,” the Pope said.

“It is true that there were voices that spoke out, like Bartolomeo de las Casas, for example or Pedro Claver, but they were the minority,” he added.

“And I say consciousness, because in the unconscious, there is still something.”

“We have — allow me to say it — a somewhat colonialist attitude of reducing their culture to ours. It is something that comes to us from the developed way of life, our own, because of which we sometimes lose values that they have.”

The Pope suggested that this can stem from an accelerated material development in the first world that loses sight of deeper values.

Prime example of a mind gone to pot.

And the Inquisition was cold blooded murder and the killing was the Templars was conspiracy to commit murder and murder and robbery- so there is that mr pretend pope who is really against Jesus.

If it was ‘genocide’ apparently the European invaders weren’t very good at it.

What S. Remember Genghis Khan, Atilla the Hun, Napoleon, The Romans, Saxons, Vikings, etc.! We have All been ‘victimized’ for MILENIA. It was just their turn. Note: Re Genocide, … they are still here.

Don't Worry About It

Good thing nobody cares what a kiddie-loving creep like this miscreant thinks anyway. I’ll make sure to still not give a rat’s behind on his opinion. You’ll get farther in the world that way. At least you’ll maybe grow up and be a man. Nothing like this dope of a pope. What a loser!

So godless heathens trump Christian peoples, sounds about right for a Marxist. Judging the past using current realities is a fools errand of the witless.

Do something about your pedo file glass house before talking about people who are better then you!

Moreover if the EUropeans had not colonized America there would have been no Bible in America, and that means that all Indians who have perished for ever in h**l. Europeans brought the Bible to America, and although most of them were not Christians (especially Catholics) they brought the name of Jesus whereby the natives could be saved.

What did the Native Americans do to the Clovis People? A little genocide maybe?

In history there was more genocide done by the Catholic church than any other religion other than Islam.

Amen! They worship a different Jesus than the true born-again church of God. Michael Voris from the Church Militant, if you know who he is look up his video on YouTube called, “The Vortex-The “Protty” Jesus”. In it he admits it with vitriol! I hope all watch it and have their eyes opened because finally the truth comes out! The Roman Catholic Church is NOT Christian at all. They hate protestants who are Bible believing Christians. Voris even mocks the Bible calling it ‘a book’! Hopefully they here will allow the link I have provited. https://www.youtube.com/watch?v=iYxmo7Dpi0M

Oh my what a liar he is. Did not the popes send Columbus to do this very thing? Force them to bow to the Roman Catholic Church and convert or die??? YES

Germany Bans Farmers from Fertilising Own Land to Serve EU 'Green Agenda'
Farmers in Germany have been banned from properly fertilizing large areas of their land under strict...
No posts found
wpDiscuz
14
0
What are your thoughts? Click to commentx
()
x
| Reply