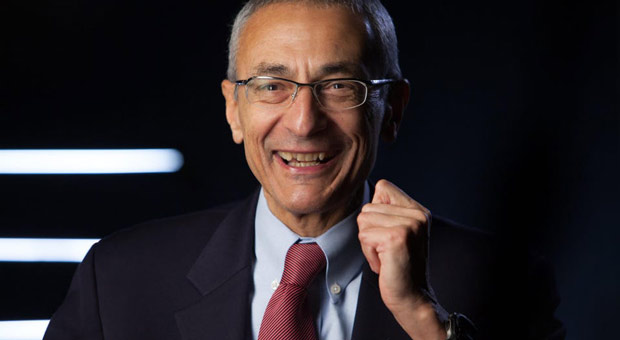 One of Washington’s biggest swamp creatures, John Podesta, will return to the White House to help President Joe Biden allocate billions of dollars for “climate change” and “green energy.”

“His deep roots in climate and clean energy policy and his experience at senior levels of government mean we can truly hit the ground running,” Biden said about Podesta to the New York Times.

“Under Gina McCarthy and Ali Zaidi’s leadership, my administration has taken the most aggressive action ever — from historic legislation to bold executive actions — to confront the climate crisis head-on,” Biden said in a statement.

Biden praised McCarthy and Zaidi for their work.

“I am immensely grateful for Gina’s service, and I am proud to announce the promotion of Ali to National Climate Advisor,” Biden added.

“Gina has been an invaluable member of my senior staff since day 1 of the Administration, and I wish her the best as she moves forward.”

Podesta has slipped in and out of past administrations for decades, making himself extremely wealthy in the process.

Now Podesta will be in charge of allocating $370 billion in funding allocated in the so-called “Inflation Reduction Act” to Wall Street-backed green energy projects.

Podesta told the Times he would focus on the goal of transforming America away from oil and fossil fuels.

“The transformation of the energy economy is going to be the biggest thing economically that is happening in this country,” he said.

Podesta promised to work to create “a future that is not blighted by the threat of climate change.”

Podesta will step down from the leftist think tank Center for American Progress board to join the Biden administration.

Not long after serving as the former chief of staff to President Bill Clinton, Podesta and his brother Tony Podesta founded a massive lobbying firm.

He was most notably the chairman of failed presidential candidate Hillary Clinton, he also served as former President Barack Obama as counselor.