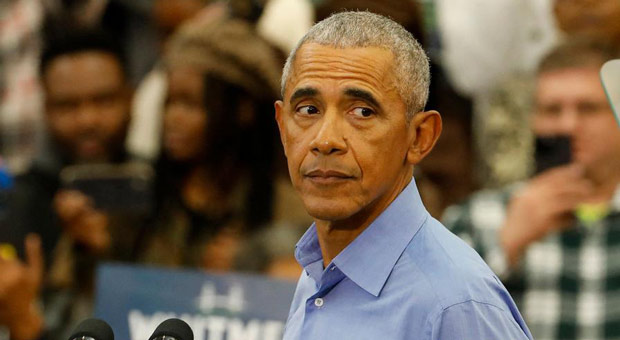 Sinema skipped a rally in Phoenix where Obama was scrambling to support Democratic Sen. Mark Kelly and gubernatorial candidate Katie Hobbs – both of whom are in danger of losing races that were once comfortably in their grasp.

Obama called upon Arizona voters to reject election “deniers” – a veiled jab at GOP gubernatorial candidate Kari Lake, who is leading the race despite smears of being an extremist and conspiracy theorist.

“If you’ve got election deniers serving as your governor, as your senator, as your secretary of state, as your attorney general, then democracy as we know it may not survive in Arizona,” Obama said.

“That’s not an exaggeration. That is a fact,” the former president said.

The absence of Sinema spoke volumes, most notably in a battleground state where moderate voters might put Kelly and Hobbs over the top.

Sinema had been invited to attend but passed, Democratic officials confirmed.

“She was not in Phoenix today for another commitment and so couldn’t join,” a Democratic Party spokeswoman told The Arizona Republic’s, Laurie Roberts.

Roberts noted Arizona’s senior senator isn’t terribly happy with her party, nor them with her.

“I guess it’s not surprising that Sinema was washing her hair or whatever,” Roberts wrote.

“Democrats are still steamed that she voted against an increase in the federal minimum wage, and party leaders censured her earlier this year for aligning with Republicans and supporting the filibuster.”

The columnist admitted that “Sinema is the Democrats’ superpower this year – or she should be.”

“She’s the highest ranking Democrat in the state, and while her own party doesn’t much like her, independents and moderate Republicans do,” Roberts wrote. “So, where is she?”

“Chuck Schumer does not own Kyrsten Sinema. He wishes he did.”

“Everyone knows [Senate Minority Leader Mitch] McConnell won’t own me,” he said.

And as for Sinema herself, Masters said, “She’s a very talented politician. She’s good. She’s active. She’s really actively engaged. And I hear this from Republicans — if you got a problem, you call Sinema’s office, you get a response.”

Democrats are in a state of panic now the race between Kelly and Masters has been tightening.

The RealClearPolitics average has Lake up by 1.8 points, and Hobbs has yet to be up in a single poll counted in the aggregate since mid-October.

It didn’t help when the Democratic candidate refused to debate Lake, something which CNN even grilled her about.

One of the last Dems capable of rational thought. She ought to get out while she still can…

Maybe she will pull a Tulsi.

Election deniers? Since when is it not ok to ask questions about election irregularities? Democrats are completely full of s**t.